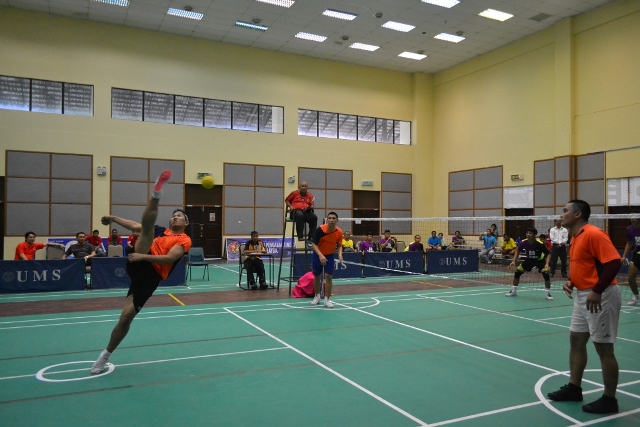 MONDAY, 03 JUNE – Universiti Malaysia Sabah (UMS) Sepak Takraw Championship 2013 was successfully held recently under the UMS Sepak Takraw Club. Its championship director, Shariff Md Idris Md Sani said that the championship was a continuous project of the club under the supervision of an officer from the Student Affairs and Alumni Department, Ahirunnisham Ahmad especially in their efforts to popularise the sepak takraw game in Sabah.

A total of 30 teams including two from Negara Brunei Darussalam took part in the championship which was held at the Main Lecture Hall A1, UMS. The opening ceremony was officiated by the President of the Sabah Sepak Takraw Association (ASTAKA), Datuk Hj. Awang Sham Hj. Amit. Also present were the Director of UMS Sports Centre, Mohd Asyraaf Fong Abdullah and the Supreme Council Members of ASTAKA.

In his speech, Datuk Hj Awang Sham praised UMS’ initiative in organising this championship which managed to attract local heavyweights and also from Brunei. He believed that with UMS’ participation, this sport would receive great interest and that it would produce more good players in future.

In this championship, Papar A emerged champion when they defeated Brunei 88 B in a stiff fight which continued until the third set. Brunei 88 B which was represented by former Sea Brunei Sports player relented and accepted their defeat with an aggregate of 15-12, 9-15 and 9-15 and settled at the second spot. Meanwhile Kota Belud A and Sahabat Masjid Nabawan were each declared as the 2nd Runner-up.

Host UMS A, was defeated in the grouping level by a thin margin even though they recorded two wins and one defeat only. UMS also sent another three teams comprising UMS students who will be representing the university in the forthcoming championship among public higher learning institutions. Even though they lost, this championship evidently had given them useful experience and exposure with the good performance shown by all participating teams.

The champion, first and second runner-up each brought home cash prize of RM1000, RM600 and RM300 and trophy. Best player went to Papar A tekong, Rozmie Mat Yassin who had shown an excellent performance throughout the championship thus winning him cash prize of RM100 and a trophy. – FL