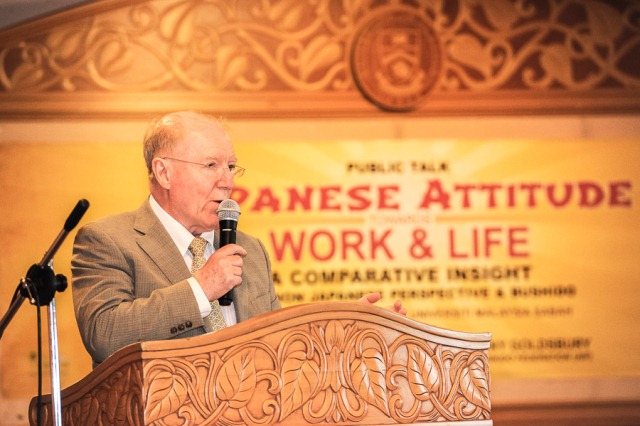 The two-day seminar will provide an opportunity for the university community to better know the martial art of ‘Aikido’.

Dr. Goldsbury, who is also a lecturer at Hiroshima University, Japan also presented a public talk on the work and life of the Japanese based on his experience of 30 years living in that country.

According to him, the culture of working hard, punctual and attentive practiced by the Japanese should be practiced by other countries.

“The Japanese culture is such that all its community practice and adopt the same value.  This is a asset, and I believe this value would continue to be practiced by generations to come,” he added.

“I would also suggest to the management of the club (Aikido) to consider proposing the learning of Aikido as one of the extra-curricular activities of the university,” he added.

His speech was read by the Deputy Vice-Chancellor of Academic and International UMS, Professor Dr. D Kamarudin D Mudin.

Also present at the programme was the Vice-Consul, Consular Office of Japan in Kota Kinabalu, Kenro Takahashi; Chairman of Aikikai Malaysia Technical Board, Tuan Haji Haneef Ali including Principal and Senior Officers of UMS. – (fl)