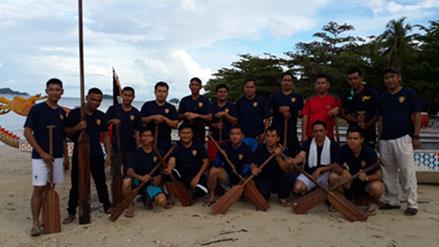 The race was held at ODEC, UMS and saw the Cocoa Department team emerged as the winner for the men’s category, bringing home the prize money of RM300.

Both teams received prizes of RM200 and RM150 respectively.

The Mixed Category was also won by the Malaysian Cocoa Department who once again received cash prize of RM300.

N’Force City Hall team took the second spot whilst the third spot was won by the team HA19 Consulenza who received RM150 for their effort.

All winners also received a hamper and certificate.

Meanwhile, PKPP Sports Coordinator, Hasnol Nordin said a total of 12 teams participated, eight for the men’s category and four for the mixed category.

He was speaking on behalf of the Director of PKPP, Assoc. Prof. Dr. Raman Noordin who added that team spirit and the determination of each committee for the Dragon Boat Course for Semester 1 2014/2015 Session was the key for the success in the organising of the competition.