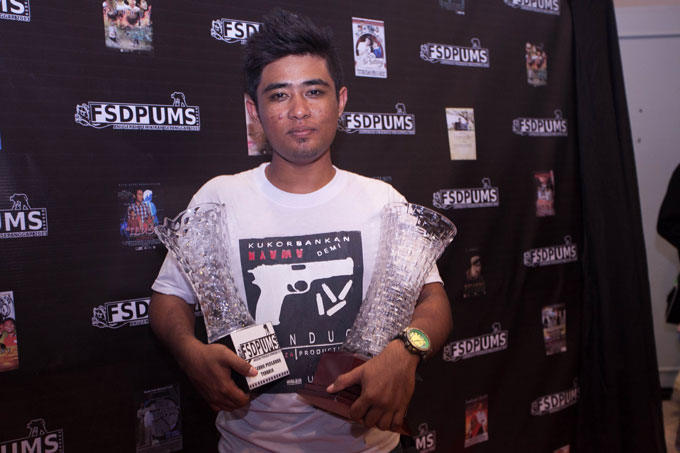 The movie ‘Tanduo’ which centred on the struggles of young children defending their village from the attack of intruders clinched the award for Best Visual Special Effects, Best Sound, Best Screenplay and Best Original Story, Audience Choice and Best Director.

“I am happy,” said Mohd Sopi, director and producer of the film ‘Tanduo’ who is also a third year student of Visual Art Technology Programme, School of Arts (SPS), UMS when met by Chancellery media.

“It took three months for me and 11 members of the production team to complete the film with many challenges such as budget, time, weather and lack of equipment,” he said.

He added that the idea of producing this 18 minute film initiated from the intrusion on Lahad Datu, Sabah that occurred earlier this year and that idea was translated into visual form which was well received by the audience as well as the panel of jury.

“I am fortunate and grateful to our lecturers who always give comments, criticism and advice throughout the making of this film,” said the winner who will be producing a sequel to ‘Tanduo’ in the near future.

According to the Festival Coordinator, M Fazmi Hisham, the organising of the event was to recognise the creativity and film production of UMS students.

“Besides recognition, students would be able to showcase and share their film production with students and audience through FSDP,” he added.

He further informed that the feedback from audience and viewers was to have FSDP open its doors to Public and Private Higher Learning Institutions in Sabah so as to have a healthy competition with the hope that it would produce better quality films.

The first of its kind, FSDP which offered 14 awards up for grabs received a total of 18 entries altogether, produced by students of SPS including entries from students of Labuan School of Informatics Science (SSIL), Labuan International Campus UMS.