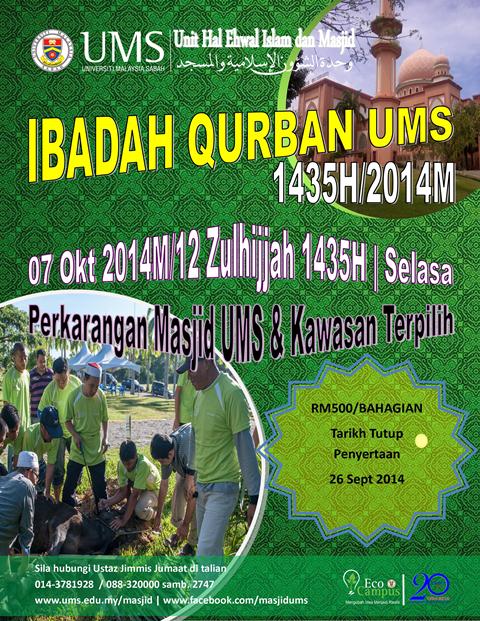 MONDAY, 8 SEPTEMBER – The Mosque and Islamic Affairs Unit (UHEIM) Universiti Malaysia Sabah (UMS) open the participation today to all UMS citizen to join in the Ibadah Korban for the year 1435 Hijrah.
According to the statement released by UHEIM, the participation fee for this year is RM500 per portion.
Interested individual to participate this year Ibadah Korban, please contact Ustaz Jimmis Jumaat at 014-37181923 or his extension 2747.
Hari Raya Korban celebration at the university level will be held at 7 October 2014, 12 Zulhijjah 1435H at the UMS Mosque premises and a few selected locations that will be inform later.
Ibadah Korban is a sunnah act, practise in Islam and the act is an annual practise to the Muslim especially in Malaysia where they sacrifice animals to fulfil the order of Allah.