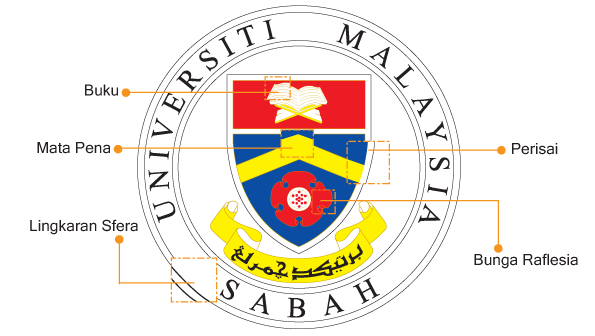 The shield symbolizes the university as one entity deriving strength from unity of effort and togetherness in supporting its vision.

The open book represents knowledge revealed to man by God as a source of intellect and belief. It also represents an insatiable spirit of inquiry and an inquisitive, analytical mind.

The nib of the pen implies accuracy and the importance of knowledge appreciation as well as symbolizing the process by which ideas born in the mind are transformed into words on paper.

The Rafflesia flower signifies the unique attributes of Sabah, “The Land Below The Wind”.

The circle/sphere describes the universe which gave birth to the world. It also indicates that what is to be imparted is the sum of all worldly knowledge.

Yellow : Symbolizes the campus members, who are always cheerful, positive and dynamic, just like the natural world, ever radiant under the sun.
Red : Symbolizes the integrity, patience and resolve, required of each member of the university in the face of obstacles to success and the achievement of excellence.
Blue : Symbolizes a harmonious living and working environment, which reflects the bond of brotherhood between members of the campus community.

The mace is the key symbol of the University. Its spherical head carved with the national crest from the Jalur Gemilang (the national flag) shows that the University, as a higher learning institution, promotes the nation’s mission to continue to provide education for its people. An Arabic version of the legend ‘University Malaysia Sabah’ is engraved on top of the ring, which acts as the foundation of the mace.

The mace’s pentagon-shaped body, legged and supported on a base, is decorated with symbols of other Malaysian states and the Universiti Malaysia Sabah logo. In addition, flowers of national significance, namely the Hibiscus and the Rafflesia, are carved underneath the UMS logo. Local folk art symbols, namely the pucuk rebung or bamboo shoot, geometry and rice are on the base of the mace. The nine stalks of rice stamped on the mace indicate that UMS is the ninth university to be formed in Malaysia. 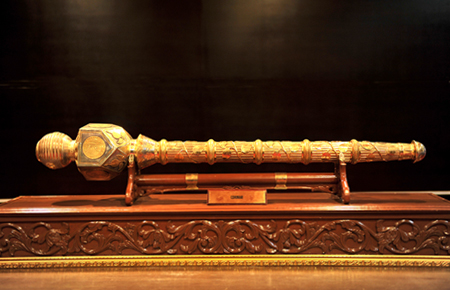 The lower part of the mace - the leg - is carved with small, ringed twigs signifying the statutes, Acts and regulations that give direction, as well as management ethics, administration and education. The spiral-betel leaves carved on the mace represent the unified schools, centres, institutions and units of the university, while also highlighting the dynamic nature of the programmes on offer.

In addition, the earth symbol carved on the mace indicates scientific and technological advancement in support of the university’s highest goals. On top of this symbol, there are five pointers representing the concentrated power of knowledge, with each pointer symbolizing a different quality needed to guide one to educational success, namely faith, piety, honesty, sincerity, and determination.