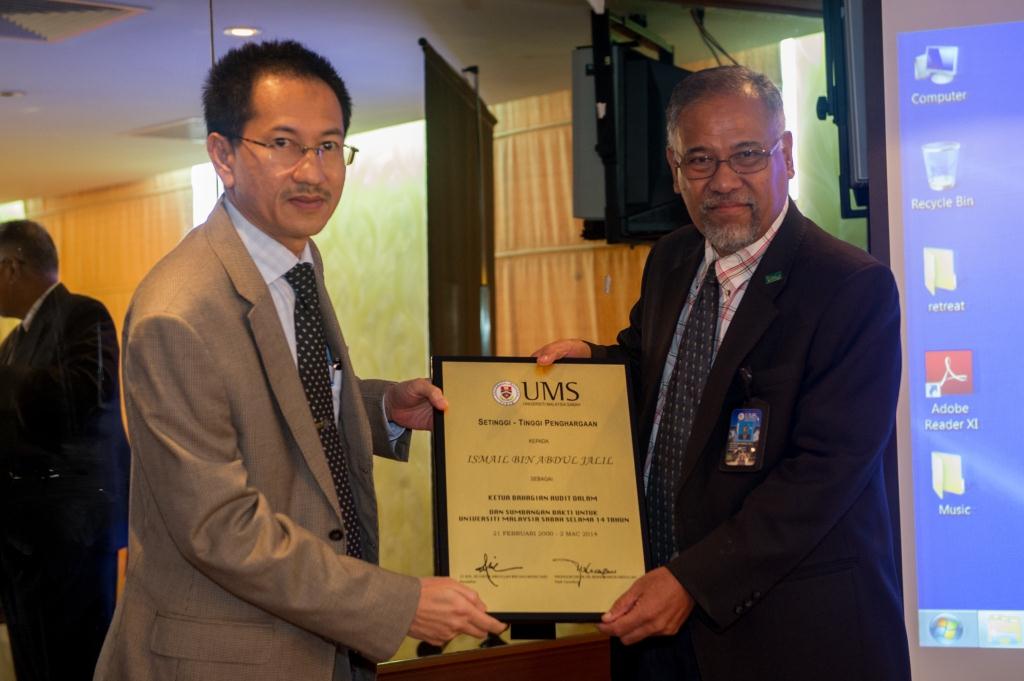 TUESDAY, 24 DECEMBER – Universiti Malaysia Sabah (UMS) Head of Internal Audit Ismail Abdul Jalil who had served UMS as an Auditor since 13 years ago was feted in a simple retirement ceremony, yet meaningful especially for him.

This native of Rembau, Negeri Sembilan had been in the audit service for 40 years where he started as an audit clerk, and would be moving to Johor Bahru with his wife to enjoy his retirement years.

In his farewell speech, he thanked all colleagues especially Deans, Directors and Heads of Departments who had cooperated with his department in discharging their duties and responsibilities to promote integrity and accountability at the university level.

When he first set foot in UMS, he found that the university’s internal control systems compromised.

“I was determined to improve the internal control systems such as payments, receipts and others in the first five years. However, there were many more aspects that need to be improved. Starting as the lone auditor of the university, now the Internal Audit Unit has 11 employees, and I am very grateful to them for their commitment in carrying out any responsibilities relating to auditing,” said ‘Pak Mail’, as he was fondly called.

Meanwhile, UMS Vice-Chancellor, Prof. Datuk Dr. Mohd. Harun Abdullah said Ismail’s retirement meant that the university had lost another hardworking and dedicated staff who had always send his audit reports to him. The Vice-Chancellor added that he was pleased with personality shown by Ismail.

“No doubt many things would go smoothly after an audit work has been performed. Thus, the university appreciates the efforts and contributions rendered by Pak Mail during his service to UMS,” he said. – MA