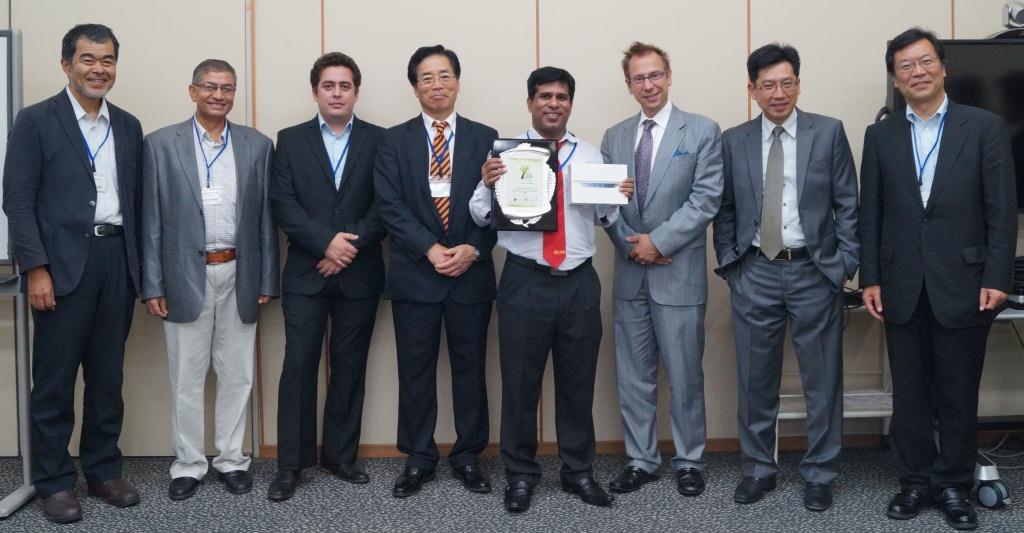 THURSDAY, 24 JULY - Dr. Md Shafiquzzaman Siddiquee, a senior lecturer at the Biotechnology Research Institute, University Malaysia Sabah, has won the 2014 International Prosper.Net-Scopus Young Scientist Award in Sustainable Agriculture Category. This prestigious award is given annually to young scientists or researchers, based in the Asia-Pacific region, who have made significant contributions in the area of Sustainable Development. Winners were chosen on the basis of 3 criteria: number of citations, number and quality of publications and patents, and documented social impact. The awards were given on 10 July 2014 in Tokyo at a symposium hosted by Hosei University.
Dr. Siddiquee is the head of the Biosensor Research Group at BRI and has been working on developing rapid diagnostic sensors. His major achievement is in the development of biosensor assay for detecting formalin and melamine in food products within 5 and 30 seconds, respectively. He has also developed a type of biofertiliser compost produced from oil palm fibres which is to be commercialised soon. Dr. Siddiquee also works on Bioprospecting (fungal biodiversity), Biomass conversion (composting of oil palm fibres and rice straw), food systems (formalin, melamine, food and beverage colouring, metals detection from drinking and waste water) and Biotechnology (drug detection, waste eggshell membrane).
He has published 40 papers in high impact ranking journals and wrote 2 books. He also has a patent and won 13 research awards. He received the Best Post Graduate Award, 2011 from University Putra Malaysia for being the most outstanding postgraduate student of the year. Dr. Siddiquee has contributed significantly in his research areas nationally and internationally and his research findings have been reported in local TV stations and various news agencies. He received the commendable service award for excellent annual performance appraisal in year 2013/2012. He had been awarded Gold, Silver and Bronze medals in competitions for research and innovation held at University Putra Malaysia and Universiti Malaysia Sabah since 2008-2014. In addition, he has attended and presented scientific papers in various national as well as international conferences. Dr. Siddiquee has reviewed scientific proposals and articles in journals of international repute.
For winning the award, Dr. Siddiquee has been offered a fellowship with the Alexander von Humboldt Foundation. The foundation will provide travel, supplies and living expenses to spend between six and eighteen months collaborating with any research group in Germany. – (fl)