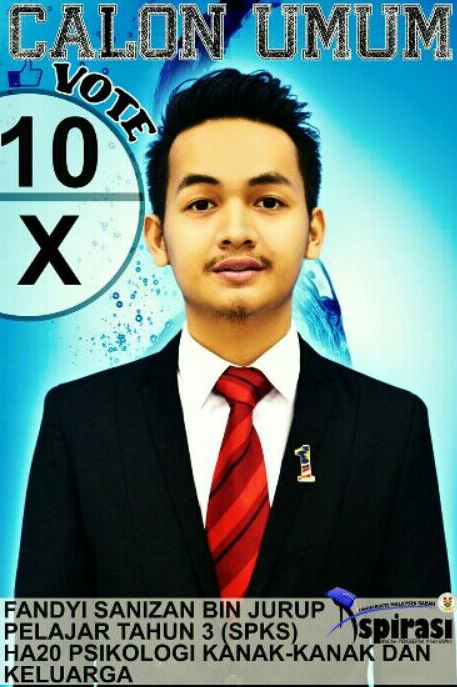 FRIDAY, 01 NOVEMBER – Fandyi Sanizan Jurup was appointed President of Universiti Malaysia Sabah (UMS) Student Council Representatives (MPP) 2013/2014 academic session after he was listed as one of the winners for the General Seats at the recent Campus Election (PRK) announced last night.

With the tagline ‘Leading Students’ Excellence’, this 3rd year student of Children and Family Psychology, the School of Psychology and Social Works (SPKS) was appointed to spearhead UMS student council leaders, while forming his cabinet immediately after the counting of votes was done.

Fandyi who originated from Sandakan Sabah said that he would strive to be the best student representative and ensuring UMS students were aligned with the university’s management towards achieving excellence.

“I will also work hard to be the moderator for students not only for their welfare and harmony but also as a channel to put forward their problems to be brought to the higher authorities,” he said when contacted by UMS Chancellery Media.

Fandyi who garnered 1,680 votes also thanked UMS PRK Committee who ensured the smoothflow of the election process enabling candidates and students to cast their votes without any hitches.

“Not forgetting all students who had given their mandate for me to be one of the winners of the seven Main Campus General Seats contested,” he added.