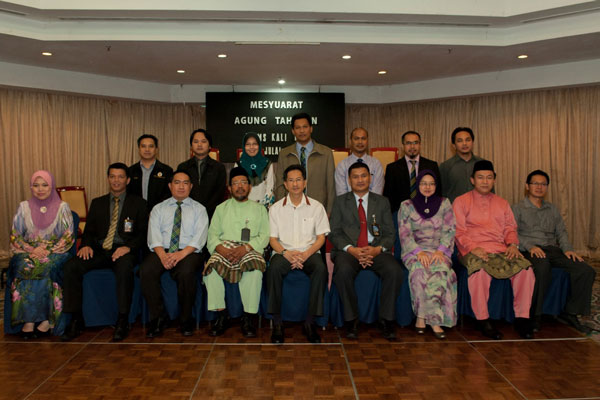 FRIDAY, 19 JULY – The Senior Deputy Head Librarian Universiti Malaysia Sabah (UMS), Tuan Hj Zawawi Tiyunin was elected as President of the Management and Professional Non-academic UMS Officers Association (PPUMS) when he garnered the highest votes at the recent Annual General Meeting to elect their Supreme Council members of this EcoCampus University at a leading hotel in Kota Kinabalu.

The election saw the immediate past-President, No’man Hj Ahmad stepping down as his three term expired and made way for Tuan Haji Zawawi assume his duties as the newly-elected President for the 2013/2015 session. The newly-elected committee members consisted of old and new face in the line up, and were given the mandate by the association’s members to hold office for the coming term.

The UMS Vice-Chancellor, Prof. Datuk Dr. Mohd Harun Abdullah who officiated at the event said that the university supported the activities of PPUMS which he said would give a high impact to the university, community and nation. He also hoped that PPUMS would continue to play its role in being more active and to foster good relations with the surrounding community.

“The strength of an association is not on its supreme leader, or its members. It should be supported with strong financial resources. Programmes which are income generating to the association should be well planned and made into reality,” he urged.

He later presented certificates of appreciation to the previous line-up of PPUMS for the Session 2011/2013, besides breaking fast with the members. - FL