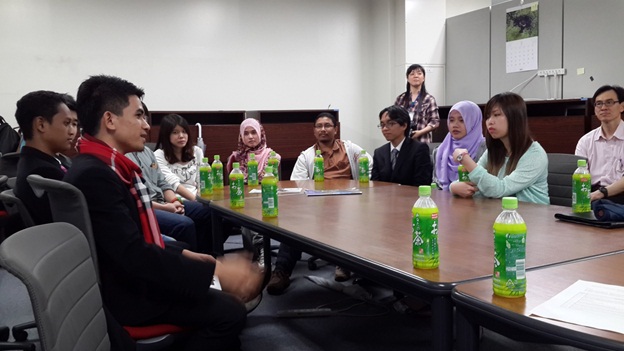 At the first visit, the delegation visited the library, lecture halls, sports complex and students dormitories of the Tokyo University of Foreign Studies (TUFS) campus accompanied by the university’s officer, Matsushita Daisuke. Besides touring interesting places, the delegation from this EcoCampus University also attended talks on the university’s education and researches by the Director of TUFS Academic Affairs Director, Prof. Dr. Miyazaki Koji and the TUFS Head of the Malay Language Programme Director, Assoc. Prof. Dr. Soda Naoki.

Dr. Soda voiced that the Malay Studies Programme was one of the programmes offered by TUFS. He said, eventhough there were many universities in Japan offering Malay Language Studies as an elective subject or second language, the country had only a few universities that offered Masters Programme in Malay Studies. He also reported that the Malay language had been taught in Japan since 1908.

The delegation was then brought to a Malay Language class to witness for themselves the session which was taught by a Malaysian, Assoc. Prof. Faridah Mohamed. All members of the delegation were fascinated to see the Japanese students studying diligently the Malay language besides being able to read and write in Jawi.

Datuk Dr. Hj. Kasim extended his invitation to students of the said programme to come and visit UMS and take part in the homestay programme so that they can learn the dialect, custom and culture of the communities in Sabah while enjoying the attractions that Kota Kinabalu has to offer.

MPP President, Mohd Juhar Harun who was also in the delegation was captivated by the excellent grammatical order and fluency of the Japanese students in speaking the Malay language. He hoped that a collaboration be made involving students of TUFS-UMS as an effort to help them delve further into the language.

The delegation then visited the Electro-Communications University (UEC), a science and technology driven university especially in the field of information and computer science, electronic enginering/mechatronic, physics and applied chemistry and Lazer Science. They were received by the International Relations Director, Prof. Dr. Hamano Nobuo and Assoc. Prof. Dr. Choo Cheow Keong.

The delegation was then given a talk on the foundation and programmes offered by the university. Datuk Dr. Hj. Kasim also expressed his interest in a joint collaboration with UEC in the field of science and engineering involving the exchange of academic staff and students in the field of education and research.

MPP members had a brief discussion with Malaysian students who were studying at UEC. According to Mohd Juhar, the sharing of ideas were important towards shaping a global thinking thus contributing to the success and development of the nation. At the end of the trip, the delegation visited other facilities including research laboratories in the field of robotics and material science. – FL