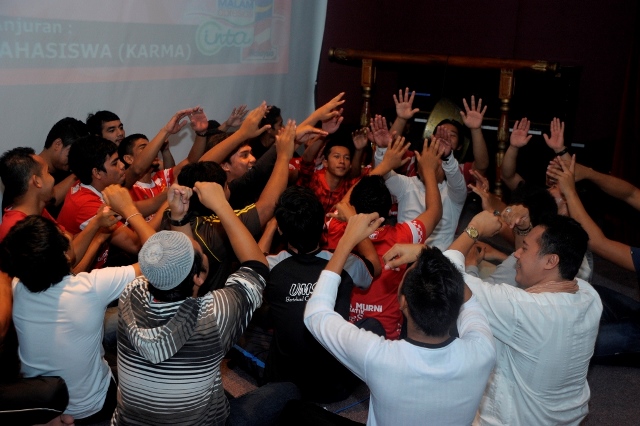 MONDAY, 13 MAY – The Student Literature Club (KARMA) had organised an Appreciation Nite called Malam Apresiasi Cinta 1 Malaysia (MAC1M) at the Ahmad Nisfu Theatre, School of Arts Studies, Universiti Malaysia Sabah (UMS) recently. With the theme ’50 Years in the Formation of Malaysia,’ MAC1M whose aim is to increase the spirit of love for the country, was officiated by the Head of Chancellery Department of UMS, No’man Hj. Ahmad.

In his speech, he said as believers students should increase the spirit of love for the country as whosoever confess that he is a believer should love his or her country too.

“The new generation is easily swayed thus history continue to penalise them because of their ignorant in history. Because they are not keen in history, do not want to keep abreast with history then they are cheated with false information. Being manipulated was the result of information whose rationality can be opposed through electronic medium such as Facebook, Twitter, blog, etc.,” he said.

He added that without taking into account certain information, society could be influenced even though it is purely rumour and propaganda. These could erode one’s love towards his or her nation and negative elements planted on their minds.

“Intellectual uses brain to assess and not simply storm their way in where the wrong becomes right and the right becomes wrong. This is a sign of destruction for human race,’ he said, citing the likes of Pak Pandir or ‘Father Folly.

Taking the example of the street demonstration which included students from higher learning institutions (IPT) against the Election Commission Sabah branch recently, No’man who also conducted public speaking for an hour said that the incitement from individuals and groups who wanted to see Malaysians divided was an act that should be avoided.

“IPT such as UMS is a tower of knowledge tasked to educate the young to be knowledgeable and to think rationally in whatever actions they are in. Do not act irrationally because at the end the young generation and future generation would feel the consequences,” he stressed at the event attended by 120 students wearing red as a symbolic act to be true believers.

Meanwhile, the programme director Astuti Asnawi said, the aim of the programme will not stop at just this event but will continue until state level to symbolically express the young generation’s desires the importance of blissfulness, harmony and peacefulness. Besides that, the theme ’50 years in the Formation of Malaysia, Sabah and Sarawak’ will be the main strength and commitment to all UMS students and staff and the people of Sabah on the importance of sustaining the love for our country.

At the function, visitors were also entertained by poetry recital, songs and dikir barat. Among those who were invited were Awang Karim Kadir and Ampuan Awang with his presentation of a poetry entitled ‘Jebat Maafkan Aku’ (Forgive Me Jebat). Among the UMS students who collaborated in the poetry recital were those entitled Cinta Watan Tanda Iman, Bangsaku, Kitalah Tuan, Di Halaman Kembang Sepatu Ini, Selamanya Sejahtera Warga, and a song ‘Warisan’ popularised by Sudirman and Dikir Barat 1Malaysia. – FL