Being Inquisitive, key to success for ums international student 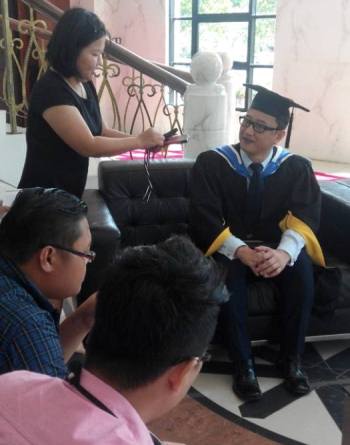 TUESDAY, 24 NOVEMBER –Being inquisitive is the key to success for Haku Josh Kim Tae Hoo, 46 from Korea who obtained excellent results when he achieved a Cumulative Grade Point Average (CGPA) of 3.92.

He said, the education system in UMS that uses bahasa Malaysia other than English language forced him to be more inquisitive whenever lectures were conducted.

“I felt that other students were annoyed with my actions, when I had to interrupt the class, which was a distraction to other students who were attentively listening to the lectures.

“I am the oldest student in the class, and the one asking so many questions,” he said while joking about his experience in studying for his Bachelor of Arts with Honours in Visual Arts Technology.

Haku Josh said, he was very lucky to be able to get assistance from his course mates especially in finishing all the assignments given.

Asked why he chose UMS as his choice for study, he said, initially he was here to teach music but was recommended by a lecturer to continue his studies in visual arts technology.

We have 6 guests and no members online