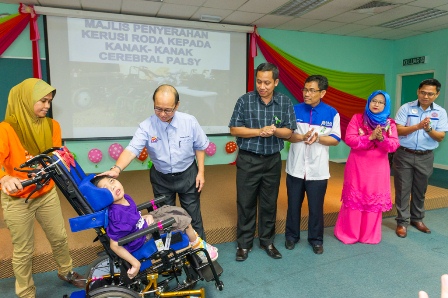 TUESDAY, 05 MAY – A total of 19 children with Cerebral Palsy (CP) received wheel chair in an event held at the Seminar Room of the Faculty of Psychology and Education (FPP) Universiti Malaysia Sabah (UMS) recently.

Meanwhile, the Director of Welfare Department Sabah, Mohammad Noor Wahab said this when reading the speech of the Minister of Community Development and Consumer Affairs Sabah, Datuk Hajah Jainab at Datuk Seri Panglima Haji Ahmad Ayid said, the contribution was a noble effort in supporting the welfare of children with CP and the community.

“We hope that this effort would improve and enrich the quality life of these children with difficulties in brain control.

“The government has always given strong support to any activity that may increase the participation of persons with disabilities (OKU) in the community and raise public awareness on the need to be independent,” he said at the handing over of wheel chair to children with CP.

Meanwhile, Chairman of MyCP, Zatul Hejanah Abdulila explained, the event was a continuation of a similar event held in Kuala Lumpur, Kelantan and Sarawak.

He said, MyCP believed this effort would be the main catalyst to create a Cerebral Palsy facility in Malaysia.