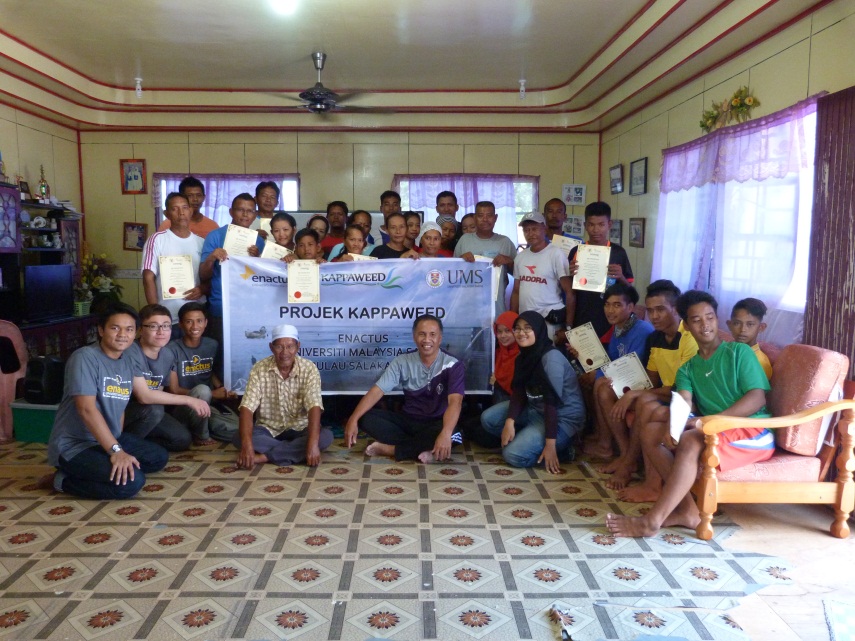 THURSDAY, 2 JULY – Selakan Island, Semporna, which lies at the East Coast of Sabah, is mostly inhabited by the Sea Bajau and Suluk. The population of this island is active in the planting industry and production of seaweed cultivation, making Selakan Island one of the leading seaweed producers in Southeast Asia.

However, due to the weakness in seaweed industry management system at this island, seaweed producers at Selakan Island find it difficult to generate a stable income to support their families, earning at less than RM600 a month.

The residents of Selakan Island fail to see the opportunities that exists in their environment and do not realise the true potential of the seaweed industry if they cultivate the seaweed themselves.

The first step achieved by Enactus UMS was when a workshop on “Strengthening Skills” was organised with the help of the Director of Seaweed Research Unit Universiti Malaysia Sabah (UMS). The workshop teaches some teaching modules that are able to hone the skills of 40 villagers in the Selakan Island in asset and business management.

The organisation is made up of seaweed entrepreneurs itself; a businessman, Haji Rubani bin Isnin was appointed the patron to ensure the Kappaweed project is implemented systematically and is sustainable.

With the collaboration of the Sabah Tourism Board, Enactus UMS hopes that this project would gain support from local community and would be able to revive the seaweed industry in Selakan Island. - (fl)