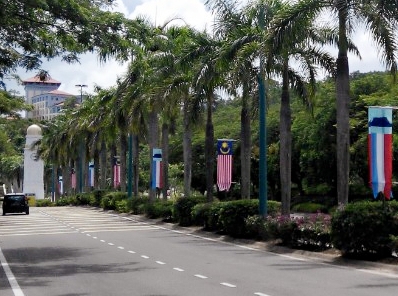 MONDAY, 03 AUGUST – The National Month festivity which falls in August is gaining momentum even though we have only entered the third day.

For Universiti Malaysia Sabah (UMS), the festivity is more evident with the installation of the giant ‘Jalur Gemilang’ and Sabah flags along its main gate.

UMS Media observed that the flag, the pride of the nation and state have been mounted on poles along the main streets of the university such as the Perdana Puncak Ilmu road, Samudera road and Canselor road.

The flags were also seen mounted on the fences of the campus.

Several vehicles belonging to staff and students of UMS were also attached with the mini version of the National flag as a sign of patriotism to a country that will celebrate its National Day on 31 August 2015. - (fl)