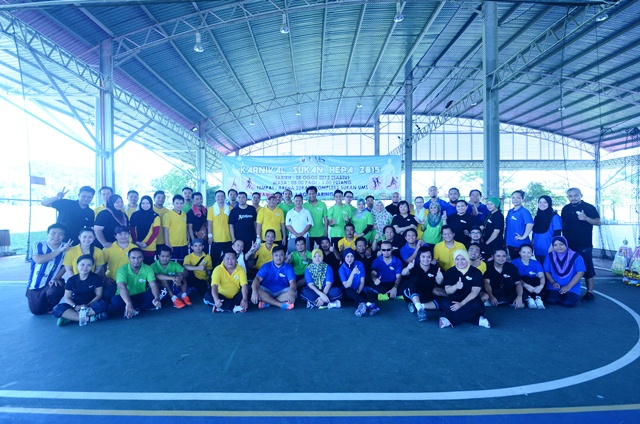 Held at UMS Sports Complex, the carnival was participated by departments and centres under the office of the Deputy Vice-Chancellor Student Affairs and Alumni (HEPA), Associate Professor Dr. Ismail Ali.

Known as the HEPA Sports Carnival, it listed four contingents; Black represented by staff of the Special Office of the Deputy Vice-Chancellor HEPA, Welfare Division, Scholarships and Student Disciplinary as well as the Arts and Culture Division HEP.

Green Contingent was made up of a combination of staff from Sports Centre and Alumni Centre whilst Blue Contingent was from among the staff of the Housing and Hospitality Division HEP.

Yellow Contingent was made up of Counseling and Career Guidance Division, HEP Bursar Zone and Administration Division.

All contingents competed in Volleyball, Netball and Sepak Takraw during the carnival.

The carnival, organised for the first time saw Green Contingent emerged the strongest as they won in two categories; futsal and volleyball.

Netball game was won by the Black Contingent, whilst the Blue Contingent was announced as the winner of sepak takraw.

The carnival, among others aimed to strengthen relationship among staff, as well as promoting sports activities as an aspect that is emphasised in health care.