Change Begins with Us 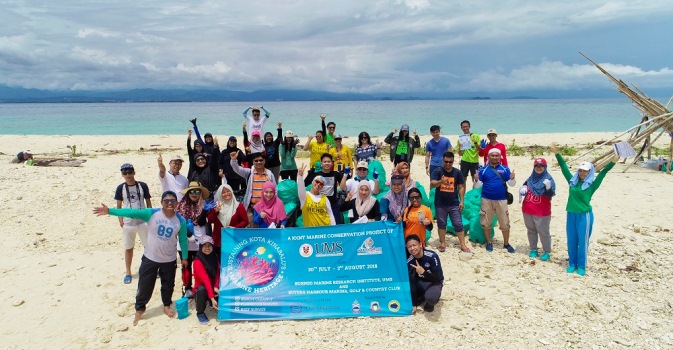 TUESDAY, 07 AUGUST - Our ocean is not a dumping site for people’s debris. Surplus human activities have severely affected the marine life in the oceans by releasing harmful substances such as plastic, industrial and agricultural waste, and chemical particles into the ocean.

It is a disturbing fact to know that even though people are aware of the state of marine pollution we are facing, they still continue to use plastic; the most common man-made element found in the ocean.

A recent beach clean-up programme under a joint marine conservation project between the Borneo Marine Research Institute, UMS and Sutera Harbour Resort; found that the biggest source of pollution in the ocean came directly from the land based sources.

“Based on the rubbish collected, most of the trashes are produced locally. Rubbish were thrown into the river and carried out to the ocean.

“Some rubbish will sink to the bottom of the sea, and some will be taken by the tides to the beaches or mangrove areas,” said Associate Professor Dr. Juanita Joseph during her presentation of the Beach Combing survey findings for the Sustaining Kota Kinabalu’s Marine Heritage project, here on Friday.

She also pointed out that some of the rubbish was suspected to be dumped directly into the ocean or on the beach.

“In fact, thousands of tonnes of waste and rubbish are dumped into the ocean on a daily basis,” she added.

She revealed that from the survey, for every 100-metre of the beach clean-up namely Pulau Sulug, Kampung Kibagu, Sepanggar and the public beach near Sutera Harbour Resort; the most common waste was plastic.

“There were 6,500 plastic mineral water bottles and 8,000 pieces of styrofoams collected during the beach clean-up. We even collected 100 diapers. Plastic bottles and diapers take up to 450 years to biodegrade and styrofoams appears to last forever; it is a non- biodegradable product.

“What is really disturbing to me is that most of the plastic wastes were single-use plastics. This is something that we can change by reducing the usage of single-use plastic into more environmentally friendly reusable alternatives,” she said.

Meanwhile, according to Dr. Chen Cheng Ann, the Head of Marine Science Programme in Universiti Malaysia Sabah; “the earth is covered with 70% water and it is common for people to assume that all rubbish and debris will be diluted or dissolved in the water.

“But in reality that is not the case; especially with plastic, it never disappears.

“It is imperative for people to know that plastic is a significant threat to the entire marine life,” he said.

He stressed that even though the debris and rubbish dumped into the ocean are released kilometers away from land, they are washed up to beaches and coastal areas, which affect the marine biodiversity.

“Plastic pollution is one of the most serious threats to the ocean. It is harmful to the environment as it does not decompose easily and is often perceived as food by marine animals.

“Change is inevitable and we need to take action now. We need to be responsible human beings by working together to protect our oceans by beating plastic pollution,” he said.