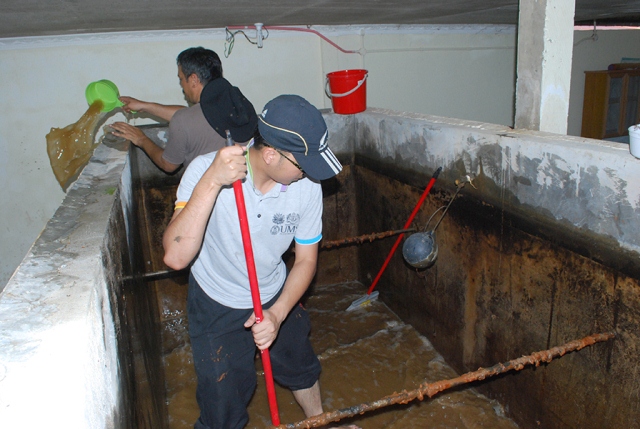 TUESDAY, 17th FEBRUARY – While the rest of Universiti Malaysia Sabah (UMS) staffs under Al-Haqq group were busy clearing Al-Raudah cemeteries, Kg. Brunei Membakut, a group of five from Chancellery Department chose Jamek Mosque, Kg. Brunei to clean.
The mosque was previously affected by the flood, as high as one and a half feet, last month. Though the mosque was clean before by volunteers, however, the effects of the flood still can be seen.
Because of the previous clean up, the cleaning process become easier and the team, together with Atikah Enterprise staffs, focused on cleaning the cobwebs and moping the floor. This is one of another UMS' corporate social responsibilities (CSR) programme in conjunction with Maulidur Rasul celebration, UMS level this year.
Following their hunch to see the inside of the water tank for wudhu, they are shocked to discover that the water was murky with plastics in it.
The water tank covered was later open; the water drained and then cleans all the internal surface of the tank, after the mosque committee members giving them permission to do so.
A member of the mosque committee said that even though cleaning activities was done before in the inside and surrounding mosque area, but no one ever ‘touched’ the water tank.
According to her, the water tank is used by the people who pray in the mosque to perform wudhu.
Grateful with the cleaning, they mention that it was an important discovery for them since the tank was the main water source for users to perform wudhu or ablution.
Meanwhile, a Chancellery Department Assistant Registar, Norlina Kamis said that even though they are only focussing on cleaning the water tank, the mosque committee members involved in the process are also grateful for what they have done.
“The committee members also inform us that they will mention this (cleaning the water tank) in their committee meeting so that the tank will be regularly clean to keep the water pure for ablution,” she said.
For the record, the inside of the water tank is not tiled; making it hard to see dirt and the cleaning process to be harder.
Media and Citra Division