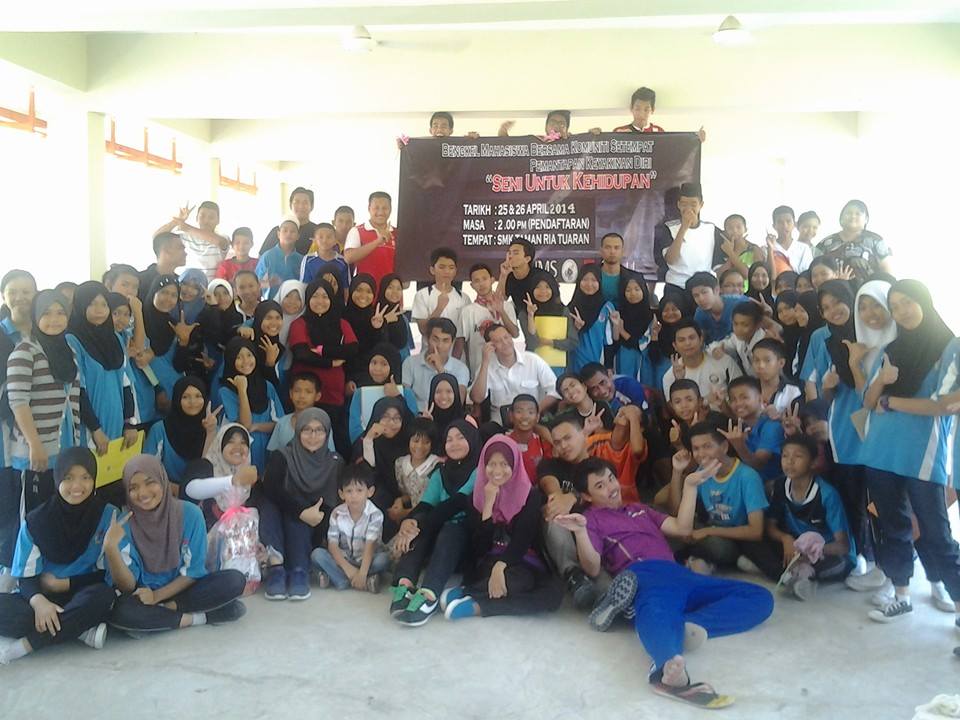 TUESDAY, 29 APRIL – A group of 20 undergrads from the School of Arts (SPS) consisting of 10 who majors in Theatre under the Creative Arts Programme and 10 in Writing became pioneers in promoting theatre in education when the Theatre in Education Programme Tuaran District Level was launched for the first time recently.

The group under the supervision of SPS lecturer, Haji Shahrifuddin Zainal launched the programme at a Joint Workshop Between Undergrads and the Community at Sekolah Menengah Kebangsaan (SMK)Taman Ria Tuaran.

Themed ‘Art For Life’, the undergrads were required to enrol in the Theatre in Education course which is compulsory and successfully organised a special production called ‘Rezak Production’ at this workshop. The undergrads also applied theatre games as a tool and and one of the ways to teach children to learn. Many benefits were derived through theatre games; among them were that students would be more daring to communicate, be honest, think creatively and critically.

This first workshop was held in the Tuaran District and were well-received by students from six schools, in addition to gaining strong support from parents, teachers, education officials and school principals. According to the Principal of SMK Taman Ria Tuaran, Tuan Hj Said Andong, workshops such as this should be carried out more often to have an impact on the students especially those who will be sitting for their examinations.

One of the workshop participants, Marcellus Nicholsonn Sanai gave a positive comment on the organisation of the workshop. “This programme gives me inspiration in guiding me to achieve success in life and it would be great if this theatre games be extended to enable participants to appreciate the value of each game,” he said.

This art-based workshop indirectly motivated students to learn the science of life such as interacting with each other, creative and critical thinking skills and to teach students how to solve problems in the fastest way. - (fl)