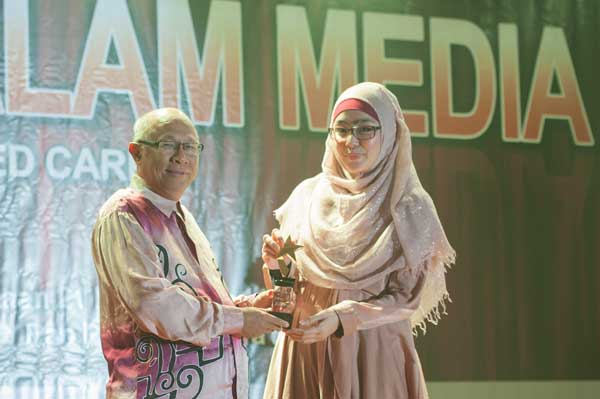 MONDAY, 24 FEBRUARY – Universiti Malaysia Sabah (UMS) presented awards to seven journalists for their commitment and active involvement in providing coverage to the university throughout 2013.

Journalist from New Sabah Times, Nor Ain Hassan topped the list of recipients when she was selected as Sensational Reporter 2013.

Another award presented was Choice UMS Alumni Category which was won by Maria Isek.

The award was presented by Deputy Vice-Chancellor of Academic and International, Prof. Dr. Shariff A. K. Omang at the Media Night which was held at one of the leading hotels in Kota Kinabalu.

The ‘Paling Manang’ Reporter award was also presented that evening and it went to RTM TV Production Unit host, Shahirah Syazwani who was selected as the winner because of her stylish outfit worn that night which was themed ‘Red Carpet’.

More than 100 media practitioners were present at the function. – SS (FL)