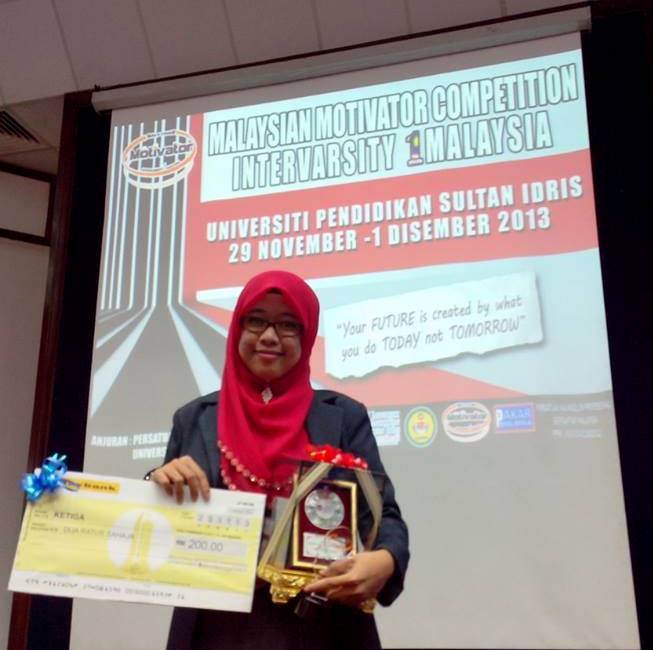 Muliana advanced to the finals with five other male contestants; two from Universiti Pendidikan Sultan Idris (UPSI) and one each from the Kota Bharu Teachers Training Institute, Universiti Pertahanan Nasional Malaysia and Universiti Sains Islam Malaysia.

“It is a challenge for me being the only female contestant who made it to the finals and the last to present. However, at the same time I am proud to be among the male contestants because they are all excellent,” she said.

With the title ‘Leaders and Leadership’ at the finals, Muliana did not expect to win third placing as all finalists were superb and extraordinary.

“I belief this success is because of the prayers of my family, friends and mentor. This victory is not for me but for UMS, my beloved university,’ she added.

Malaysian Motivator Competition Intervarsity 1Malaysia is a programme to develop talent and provide early exposure to potential students in the field of motivator.

UMS was represented by Muhammad Adlizan Admancur and Muliana Tahir who were third year students of the School of Psychology and Social Work (SPKS). Muliana took home cash prize of RM200.00, a certificate and trophy.

The competition organised by UPSI attracted 10 institutions of Higher Learning (IPTA) with each one represented by two contestants. Champion and 1st Runner-up were both won by the organising university. – ZMD