A Decade of Archaeological Research and UMS Cultural Heritage (2003-2013) 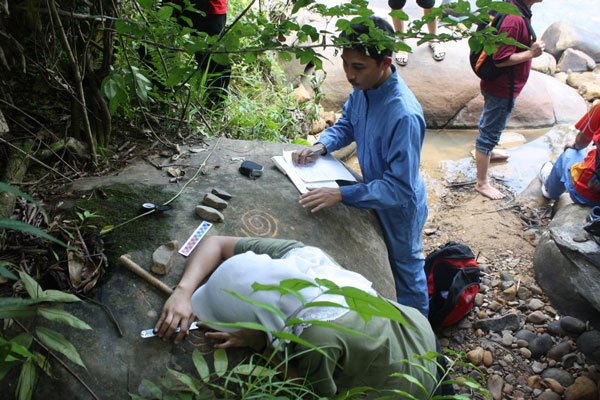 FRIDAY, 26 JULY – A decade ago, archaeological research on the shipwreck along the coastal waters of Simpang Mengayau cape, Kudat by Universiti Malaysia Sabah (UMS) archaeologists were the basis of the rapid development in this field of research areas in the following years. However, not many realised that this early development would change the scenario of archaeological research in Sabah and Malaysia in general. The change included making UMS one of the leaders in these two types of research namely underwater and terrestrial archaeology.

Now UMS can be proud of its achievement and seen to be on par with other Public Higher Learning Institutions (IPTA) which are more senior such as Universiti Malaya and Universiti Sains Malaysia that have made the same research much earlier. Archaeologist, Baszley Bee B. Basrah Bee of this EcoCampus University was acknowledged at national level when he was appointed as the Chairman of the Underwater Culture Specialists Committee, National Heritage Department since 2010. His portfolio entails being the advisor, churning out ideas and opinion in this field and becoming a reference point with regards to this field of study.

At the same time, research grants, technical, regulations, logistics and on-going collaborative research with the National Heritage Department, Museum Department Sabah and TLDM had confirmed the trust given to UMS archaeologists. In fact, some salvage commercial contractors had also referred to the university’s archaeologists and had done the same archaeological research together.

Among the notable researches are the Simpang Mengayau Cape Wreck (2004-2007), SS St. Pancras Wreck (2010), Balambangan Wreck (2011-2012), World War II Shipwreck Site (2011-2012) and the Shipwreck Pillage Sites in Sabah (2010-2013). Such research becomes a reference point in the field of archaeology not only at national and international level but also in the formulation of government policy on underwater cultural heritage.

UMS continues to advance in its research on terrestrial archaeology with its first research in Malaysia namely the Ulung Buayeh animal effigy mount ancient site and the Long Pasia Megalithic Tradition Site, Sipitang (2007-2010). The same was done on rock art archaeology research on Petroglyph (rock engravings) in that area (2008). The same research was done at other sites in Sabah.

The redocumentation of the Lumuyu Petroglyph site in Ulu Tomani (2012) led to a new finding for exploration in the next few years. The year 2013 marks a historical beginning in the research on Malaysian Terrestrial Archaeology especially in Sabah when a group of archaeologists led by Baszley Bee assisted by Master students and final year History students of the School of Social Sciences (SSS), staff from the Archaeology Department of the National Heritage Department and Archaeology Division of the State Museum found four new petroglyph sites at Ulu Tomani and Long Pasia. The sites are Petroglyph Lumuyu 2, Petroglyph Lumuyu 3, Petroglyph Naunggak and Petroglyph Narit Stone 2. Besides that, a total of 13 other sites in Pensiangan, Kinabatangan and Lahad Datu were known to have existed. These research and findings have made UMS the leader in petroglyph archaeology research in this country. Capturing the second spot in the Postgraduate Research Competition at international level held at Universiti Teknologi Malaysia (UTM) in 2012 in the Petroglyph archaeology research was significant.

The development of archaeology research holds no boundaries among lecturers and Masters students. Undergraduate students involvement also extends through the study of Heritage Management course. Since this course was introduced in 2007, a survey and the documentation of archaeological and historical sites in Sabah are the most active in Malaysia. Among them are, the icon site on the formation of Malaysia where the results of this study will be produced by RTM in conjunction with its 50 years in the formation of Malaysia this year. The production of this documentary on the results of this study is not new because the Long Pasia Ulung Buayeh animal effigy mount ancient site was also feature featured in 2010.

Many writings and seminar papers have been produced, the Simpang Mengayau Cape Maritime Archaeology (2009) was acknowledged at international level as the main reference in underwater research in South East Asia. Some other books touched on shipwreck sites, megalithic tradition and petroglyph which will be published soon.

After a decade of development in archaeological and cultural heritage research by archaeologists and students, UMS can finally be proud of the setting up of a special unit dedicated especially to generating and continual research which is more active. This idea was mooted by UMS Vice-Chancellor, Prof. Datuk Dr. Mohd Harun Abdullah in 2012 which brought about to the setting up of the Borneo Archaeological Research Unit which is still in its infancy.