Heavy Rain Did Not Dampen Their Qurban Spirit 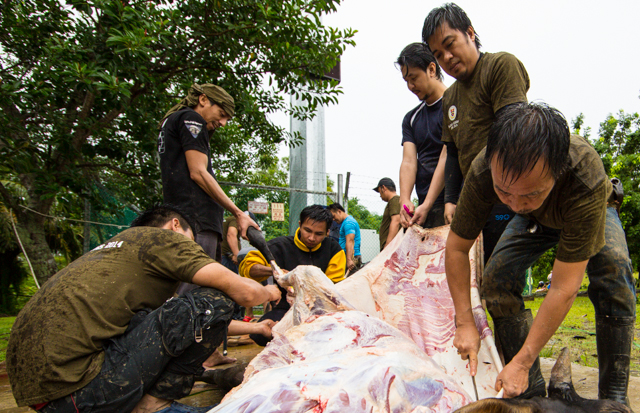 TUESDAY, 7 OCTOBER – The Qurban and aqiqah Universiti Malaysia Sabah (UMS) level scheduled to be held today went on smoothly despite the heavy rains that hit several areas in the state since Saturday.

Chancellery Media crew found that UMS staff cooperated in carrying out the Qurban which was held at the premises of UMS Mosque.

A total of 16 cows were sacrificed this year with five distributed to villagers of Kampung Nongkolud Tuaran, Minsilau, Tintuhan and Meringin Ranau.

The other 11 were distributed to staff and the needy staying in the villages around UMS campus.

Meanwhile, Mosque and Islamic Affairs Unit (UHEIM) UMS in a statement said that three cows were also donated by MBSB and Restoran Warung Padang Jawa, Alam Mesra as part of the sacrifice this year.

Qurban is a practise for Muslims around the world celebrating the Hari Raya Aidiladha on 11, 12 and 13 Zulhijjah every year. – NB/ZMD (fl)