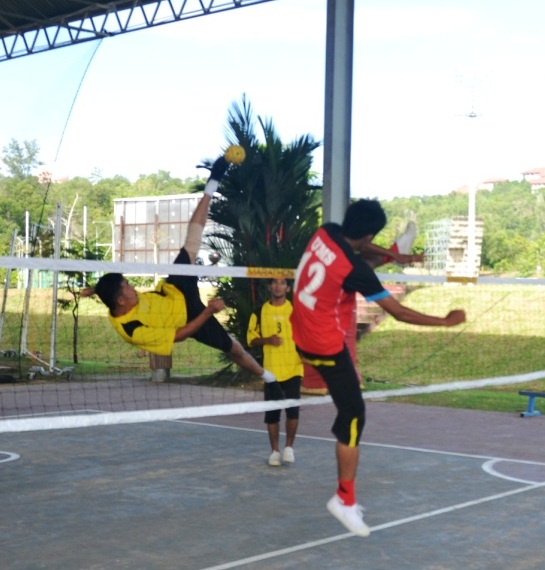 MONDAY, 10 JUNE – The Sepak Takraw Championship among Schools in Universiti Malaysia Sabah (UMS) 2013 was held recently. The Championship which was organised by the Sports Centre UMS among others was to scout for new talents besides acting as a platform to produce healthy and competent students.

The Championship had realised their dream of becoming champions for the School of Education and Social Development (SPPS) when they successfully won all competitions. The final competition saw SPPS up against the School of Arts Studies (SPS) where both groups put up a stiff fight which continued till the third set. However, luck was on SPPS’ side when they won 21-13 in the first set, lost 20-22 on the second set but won again 15-10 in the deciding set. They were crowned champion whilst SPS the first runner-up. Third placing went to the School of Social Sciences (SSS).

UMS Sepak Takraw coach, Ahirunnisham Ahmad when met expressed his pride with the achievement shown by each players at the championship.

“I hope that this championship would continue to bring the sepak takraw sports to a higher level until international level,” he urged. Among the key success stories of SPPS were booster shots and guidance by their lecturers namely Pathmanathan K. Suppiah, a specialist in the study of motor and Hasnol Noordin, a Sport Psychology specialist besides Dr. Mohamad Nizam Nazarudin who helped in physical fitness.

A total of 10 schools of this EcoCampus University took part in the championship which was held at UMS Sports Complex. – FL