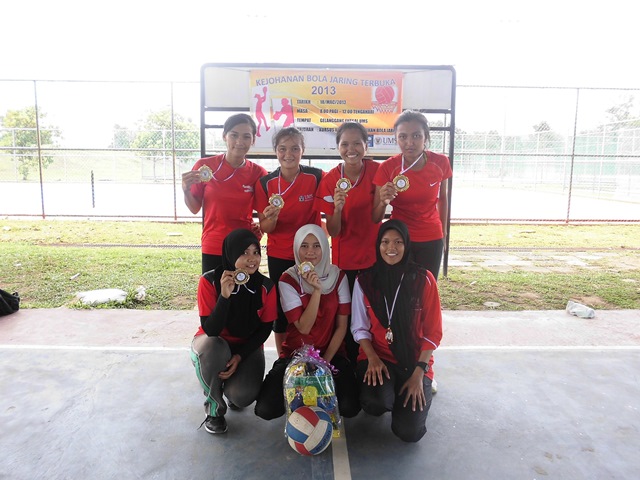 THURSDAY, 06 JUNE – The UMS Netball team emerged as champions at the recent Open Netball Championship held at Universiti Malaysia Sabah (UMS) Sports Complex. The championship which was organised by the Netball Semester 2 Cocurriculum Club (Kokum) was participated by four teams comprising students and staff of this ecocampus university.

UMS Netball team had earlier trounced MASCOM team with a score of 18-1 followed by a win of 14-1 to Kokum team before defeating G-United with a score of 14-3. Armed with a winning streak, UMS Netball team which consist mainly Sports Science students was declared the overall winner. First runner-up was Kokum team and Second runner-up was G-United team. All winning teams received medals, a hamper each and certificate.

Meanwhile, UMS Netball cocurriculum coach, Fauziah Janau said she was satisfied with the smooth running of the programme organised by students under the netball course. She said it was a good start in increasing human development skills for their future.

The director of the programme, Nurul Ashikin Razak said that all efforts by the committee members who had worked tirelessly in making this championship a success had taught them invaluable experience in organising an event. She said this experience will be useful in facing a more challenging future.

The open netball championship is done at every end of semester in UMS. Its aim is to encourage students to make sport a culture and a healthy practice besides being a platform to nurture new talents for various championships such as the Malaysian University Sports Council (MASUM) and the Asean University Sport. – FL