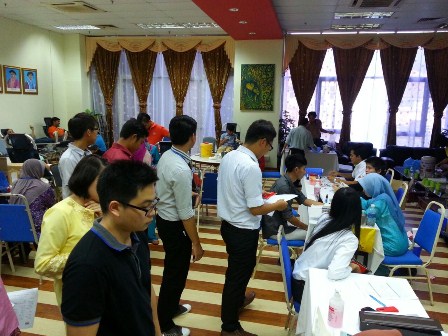 Aiming at UMSKAL community, the programme also aims to increase blood donors in Federal Territory of Labuan and giving out information on benefits to individual health as a blood donor.

The programme coordinator, Roji Sinun, said that the campaign objectives are to increase the hospital blood supply and also instilling integrity and conscientious values to individuals present. Indirectly, the campaign will be helping out to those who are in need of blood supply.

He also added that the campaign was organized to produce active students in both academic and also every aspect of their life including personality and spirituality.

About 134 students and staffs donated their blood including the campaign committee members in the blood drive organised by SPRUMS with collaborations from Universiti Malaysia Sabah Labuan International Campus (UMSKAL) and Labuan Hospital.

Targeting youth, SPRUMS believed that this group are active and will be able to influence their peers and thus, attracting more to donate.

The Programme Director, Syahidah Mahmud, expressed her thanks to all donors who are involved in increasing the hospital blood supply.