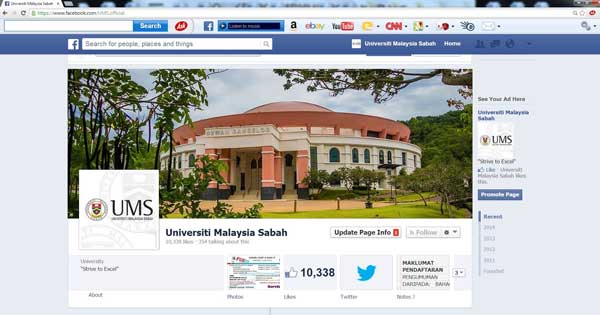 WEDNESDAY, 28 MAY- “The Media and Citra Division, Universiti Malaysia Sabah (UMS) is in its efforts to increase the number of followers in the social media account of the university.

Thus, the division is actively promoting the university's social sites, Facebook and Twitter accounts to facilitate interaction with the public including the campus community.

In a statement issued today, the division also said that three new media namely YouTube, Flickr and Linked-In accounts will be launched to share the university's image to be shared with the public.

According to the statement, UMS Facebook accounts has so far reached more than 10 thousand social network followers and are expected to increase when the three new media are launched soon.

As such, all UMS students, staff and alumni including the public who want to keep track of the latest update and information on UMS can log on to UMS Facebook at https://www.facebook.com/UMS.official. -ZMD (fl)