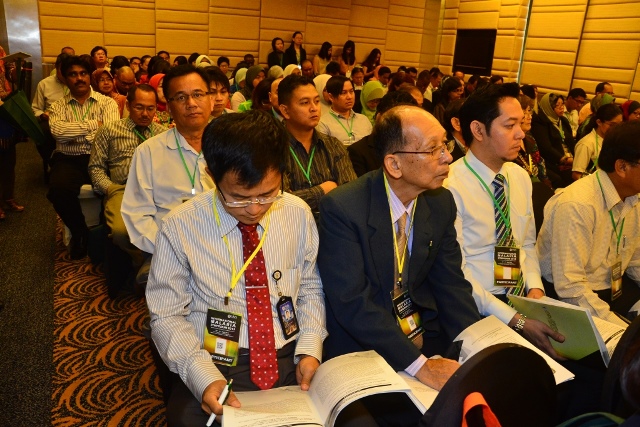 TUESDAY, 16 APRIL – More than 160 local and foreign participants attended the International Malaria Symposium 2013 organised by the School of Medicine (SPU) Universiti Malaysia Sabah starting today.  The symposium was organised at one of the leading hotels in Kota Kinabalu, and serves as a platform for knowledge sharing on the malaria disease which is seen as a world society problem.

The ceremony was officiated by the Deputy Vice-Chancellor Research and Innovation, Prof. Dr. Shahril Yusof representing the Vice-Chancellor of UMS, Prof. Datuk Dr. Mohd. Harun Abdullah.  In his speech he said that health problems caused by malaria is of grave and urgent concern.  He said in the World Malaria Report 2010, it was stated that the malaria disease affected half of the world population, with an estimation of 216 million cases and 655,000 deaths around the world.

According to him, there are four species of malaria found in Malaysia, and Sabah has the highest infection rate.

“Malaria knowlesi is the most common cause of severe malaria in the northeast of Sabah.  It has a three-fold greater risk of severity than the falciparum malaria, and it accounts for the majority of malaria admissions to several district hospitals throughout Sabah and Sarawak,” he said.

“The malaria parasite has the shortest replication period of 24 hour in the red blood cells, and when the parasite load is high, it can lead to severe malaria and malaria death in knowlesi infections.  In 2012, it has been reported that knowlesi infection has caused five deaths in Sabah,” he said in his speech at the official opening ceremony of the symposium with the theme ‘New Challenge and Strategies in Malaria Control’.

Thus he said the organising of the symposium is indeed timely as it gathers experts from all over the world to share their expertise and knowledge.

“Let’s hope that this symposium will uncover the best method to eradicate malaria not only here in Sabah, but all over the world,” he said.

Also present at the function were the Dean of the School of Medicine, Prof. Dr. D Kamarudin D Mudin and the Chairman of the symposium, Assoc. Prof. Dr. Chua Tock Hing.