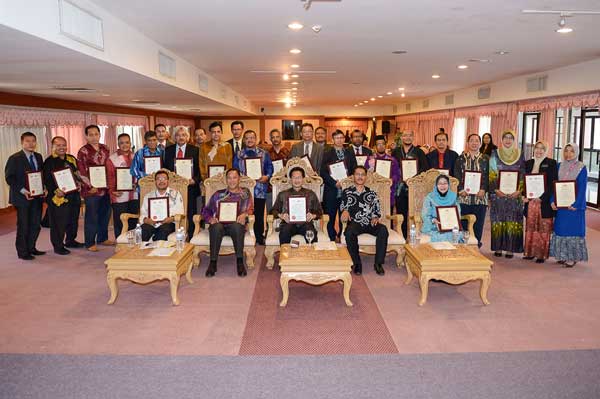 The appointment took place at a ceremony for classifier officers course and the presentation of appointment certificates to the officials at the Events Gallery, UMS.

Vice-Chancellor, Prof. Datuk Dr. Mohd. Harun Abdullah in his speech at the ceremony said the appointment was under Section 2B Official Secrets Act 1972 which was public officer from a Division/Department responsible in the classification of information and official government documents in the form of official letters, information or materials by confidentiality category which were ‘Top Secret’, ‘Secret’, ‘Confidential’ or ‘Restricted’.

“The appointment of classifier officers appointed by the Minister of Education II, Dato’ Idris Jusoh today is essential to ensure that official documents especially documents which are classified are protected and managed in accordance with the right procedures to prevent from leakage of information.

“We hope that the Classifier Officers will carry out their roles and responsibilities more effectively and efficiently,” he added.

Earlier, UMS Registrar, Datuk Abdullah Mohd. Said said the course was in response to the 4th University Key Result Areas (KRA-UMS) field which was strengthening governance, leadership and delivery systems. He explained that UMS was the 6th university which conducted this process, the other universities were UiTM, UKM, Unisza, UPM and USIM.