KIARA Teaches Youths Value of Integrity and to Combat Corruption 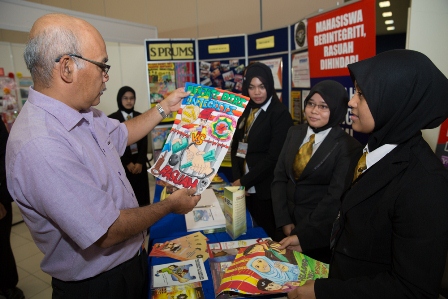 MONDAY, 27 APRIL – Of late, corruption is seen to occur rampantly, with the involvement of various groups including the young among civil servants, businessmen, university students and others.

Thus, the Anti-Corruption and Integrity Carnival (KIARA) Sabah State Level organised by the Secretariat of Universiti Malaysia Sabah (SPRUMS) could serve as a platform for educating the young about the value of integrity and sense of responsibility in the fight against corruption.

Director of the Community Education Division Malaysian Anti-Corruption Commission (MACC), Dato’ Shamsun Baharin Mohd Jamil in his speech said this at the closing ceremony of the carnival held at the Main Lecture Hall 2, UMS recently.

He said, having a materialistic mentality, embracing the easy way out and getting rich quickly were becoming more common in the Malaysian culture, thus leading to the problem of corruption, misappropriation and abuse of power.

“Therefore, KIARA is a good effort as a platform for each generation to hold discussions and express views that can help and benefit MACC.

“With the organising of this programme, it is hoped that participants could improve their knowledge and awareness and determination in the fight against corruption, which is widespread,” he expressed.

During the ceremony, Dato’ Shamsun also presented prizes to the participants from secondary schools who competed in several competitions held in conjunction with the KIARA programme.

The carnival in collaboration with the Sabah State Education Department and the Department of Student Affairs UMS had brought together secondary school students from 23 schools around Kota Kinabalu. –MA (fl)