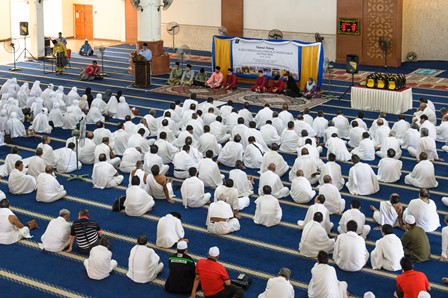 A check by Chancellery Media during the two-day programme saw that participants were engaged in listening to the briefing and involved in all the activities organised.

One of the pilgrims, Siti Labawan when met said the course was very beneficial in providing a glimpse of the atmosphere in the city of Mecca to ensure that pilgrims can do self-preparation before making the visit to the Holy Land.

“I am very happy and thankful for the opportunity to be able to join this Haj course, which gives many input for me to be better prepared when making the pilgrimage later,” said Siti who originated from Kg. Warisan, Inanam.

Meanwhile, State Director of Tabung Haji, Datin Hajah Nurlaila Haji Said in an interview said she had long ago had the desire to organise such course at Universiti Malaysia Sabah (UMS) and had long planned with the Mosque and Islamic Affairs Unit (UHEIM), UMS.

“Finally, what we had planned came true this year, in fact, the pilgrims were delighted when the course was conducted in UMS, which they see as appropriate to do all the practical activities of the pillar of Haj and Umrah,” she added.

The two-day course was conducted by Ustaz Haji Muchlish Ali Kassim, who acted as the Head Mentor of the Haj. – SM (fl)