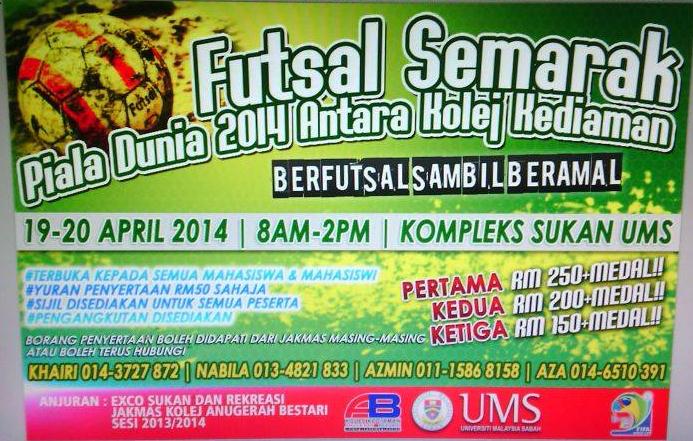 According to a statement released by JAKMAS AB, the programme adopted the concept of ‘Charity Through Futsal’ and will channel the proceeds of the donations and sponsorship of several sponsors to the Rumah Anak Kesayangan (Nur Muhammad), Sembulan.

The statement added that the game will be participated by students from private colleges such as Ascot Academy Kota Kinabalu and Sabah Foundation College in addition to participation among UMS students.

A voting session for playing teams will be conducted on 17 April 2014 (Thursday) at the AB Multipurpose Hall where each team will select the countries competing in the World Cup 2014
.
The closing ceremony will be officiated by the Deputy Vice-Chancellor (Student Affairs and Alumni), Assoc. Prof. Datuk Dr. Hj. Kasim Hj. Md Mansur at Likas Sports Complex.

The ‘Futsal Semarak Piala Dunia’ 2014 is supported by the Ministry of Youth and Sports and a number of private bodies such as the Sabah International Dairies, Raisul Trading and QL Marine Products. – ZMD (fl)