Talk on Islam and the Environment During Ramadan in UMS 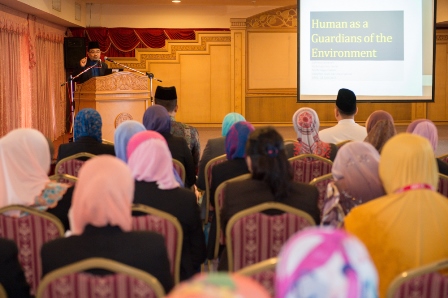 MONDAY, 21 JULY – In conjunction with the holy month of Ramadan, a talk to analyse the issue of Islam and the Environment as held at the Galeri, UMS recently.

The talk organised by the EcoCampus Management Centre had invited the State Mufti of Sabah, Ustaz Bungsu Jaafar and a lecturer with the Centre for the Promotion of Knowledge and Language, Assoc. Prof. Dr. Ahmad Tarmizi Abdul Rahman as the speaker.

Ustaz Bungsu in his lecture entitled ‘Human Being, the Caretaker of Environment’ explained that there were five things about the environment in the Islamic perspective, there are environment was a creation of Allah S.W.T., no authority, created for human, according to Sunnah and not to be worshipped.

“As the caliph of Allah S.W.T, man was made to have peace and justice on earth, governing nature according to syariat, and avoid damaging of the earth.

“The environment is Allah S.W.T’s gift to mankind to be protected,” he explained.

He added that caring for it not only rely on legal approach alone, but also needed a holistic method which is spiritual, to educate the local community.

Dr. Ahmad Tarmizi in his talk described that there were three major problems facing the world today, namely security, education and the natural environment.

Touching on the aspects of nature, he said the revolution progressing with the passage of time had become the main cause of environmental damage.

“People ignore their responsibility towards environment and dominating earth’s resources for universal advancement, whereas everything is anchored to a trouble-free life,” he said in his talk on ‘Balance of Man and Nature’.