Conferment of Honorary Degree of Doctor of Laws, TYT Hounoured 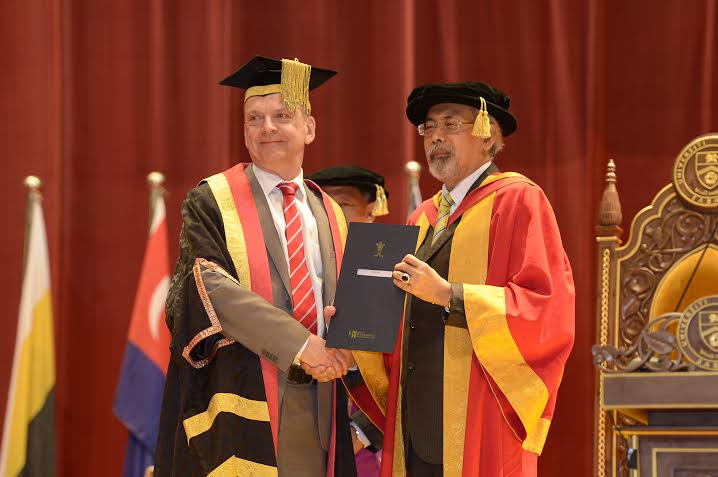 TUESDAY, 18 MARCH - “I did not expect to receive this Honorary Degree of Doctor of Laws. It is a very great honour and I am truly grateful.”

That was the expression by the Head of State, His Excellency Tuan Yang Terutama Tun (Dr.) Haji Juhar Datuk Haji Mahiruddin in an exclusive interview in conjunction with the conferment of the Honorary Degree of Doctor of Laws by the University of Wolverhampton (UoW), United Kingdom.

In an interview, Tun Juhar who is also the Chancellor of UMS said his interest in law started when he was in his school days.

“I chose law because of several factors. Among them were it ensures a bright future and a lot of job opportunities.

“In addition, being the Barrister-at-law is a professional field which is recognised in all Commonwealth countries, particularly in the United Kingdom,” he added, who was also appointed as the Patron of UoW Alumni Malaysia.

Describing his father as the main driver, Tun Juhar also shared his experiences while studying for the Bachelor of Law Degree at UoW which was formerly known as Wolverhampton Polytechnic.

He said the culture in England was certainly far different from Malaysia’s, but it was not difficult for him to adapt to as he had many friends at the university who were from Sabah.

“I have many friends who were not only Malaysians but British. While I was there, the main setback was communicating with my family back home in Sabah. There was no internet access and communitcation system like today. The only means was through letters,” he said, mentioning the name of Speaker at the Dewan Rakyat, Tan Sri Pandikar Amin Mulia as among his close friends while at the university.

When asked to comment on his involvement in the field of law, he said the unforgettable experience was to watch the reaction of families of the accused shed tears when the court announced the conviction of the accused.

“We feel for the affected families. But our decision is made according to the rules and regulations, taking in account public interest,” he said, who served as First Class Magistrate early in his career in the public service.

Tun Juhar who described music as part of his life also stressed that law had helped him not only in his daily tasks but also in politics.

“The legal field requires a lot of reading but mostly focused on the Law Report and Law Journal including Bill. That helps me a lot in my career, as a lawyer, we must be up-to-date with existing and current developments,” he emphasised.

A figure-head of Tambisan Village, Sandakan, Tun Juhar also emphasised that every legal practitioner should have a high level of discipline and integrity.

“We were taught to uphold justice for all. We cannot practice double standards in our work but be brave in upholding justice without fear or favour,” he said ending the interview.