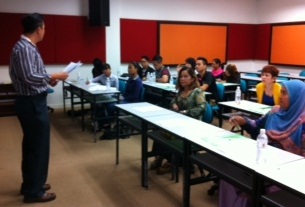 The two-day event was participated by staff of UMS including presenters, producers and newscasters attached to UMS Campus Radio Station, KKFM. The workshop which entered into its third year this year had also invited radio presenters from Sabah FM and Sabah VFM, Radio Television Malaysia (RTM) Sabah as well as undergraduates of the Journalism and Broadcasting Course, School of Social Sciences (SSS), UMS.

A radio presenter with Sabah VFM, Dennis Papam said that he gained a lot out of the workshop and would apply the new knowledge and tips to his programme which would certainly enhance his presentation style that would hopefully benefit his listeners.

Another participant, a student of Journalism and Broadcasting Course at SSS, Mohd. Hassanal Hakim Junaidi of Sarawak said that the workshop had opened his eyes on radio management. This would certainly augurs well for him personally as he had received an offer by a private radio station based in Kuching, Sarawak to undergo a two-month internship training programme there starting this June as part of the criteria for graduation in UMS.

The workshop was conducted by an invited speaker, John Paul Lee who orignates from Sabah and was himself a radio DJ or presenter and later a Music Director in one of Malaysia’s leading private radio stations. He was also involved in the production of KRU’s ‘The Way We Jam’ (Remix), Rabbani’s ‘Pergi Tak Kembali’ album, Amy Mastura’s ‘The Remix Album’ and a host of other Malaysian artistes including international artistes Sammi Cheng's and Aaron Kwok's remixes albums. He is currently a consultant to two private radio stations in Manila, the Philippines. – FL