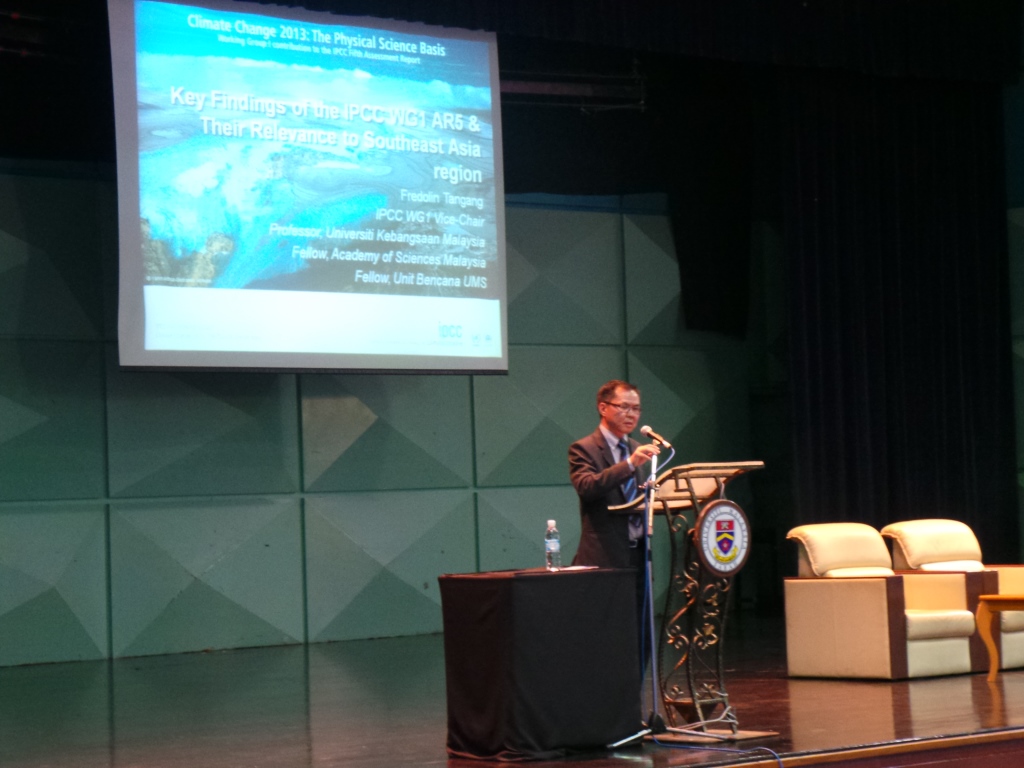 TUESDAY, 04 MARCH – The climate change over the last century requires the effort from various parties to overcome it and caring for the sustainability of the earth’s surface is key to this effort.

According to a study done by the Inter-governmental Panel On Climate Change (IPCC) since 1950, many significant climate change had occurred where these changes were unprecedented over a thousand years ago.

Climatology and Oceanography expert from Universiti Kebangsaan Malaysia, Prof. Dr. Fredolin Tangang who is a member of the IPCC panel explained that these changes were due to the atmosphere and oceans that were getting warmer, snow and ice declining, global sea level rising, and greenhouse gases increasing.

“A recent study found that the average global surface temperature has increased, ranging between 0.65 and 1.06 degrees Celsius from 1880 to 2012. By the end of the 21st century, a significant increase might occur reaching to more than 1.5 degrees Celsius.

“Aspects such as ecosystems and agriculture will be affected if no efforts were made to change the situation,” he said. He said this while delivering a public lecture on the latest report of IPCC and its relevance to Malaysia and Southeast Asia at the Recital Hall, Universiti Malaysia Sabah (UMS).

According to him, people around the world must work together to curb climate change because on-going effects caused by human influence on the climate system was very clear.

“Today’s industry tend to use technology that will eventually release greenhouse gases such as carbon dioxide, methane and nitrous oxide. Continuous greenhouse gas emissions would cause global warming.

"The industry nowadays tend to use technology that will eventually release greenhouse gases such as carbon dioxide , methane and nitrous oxide. Greenhouse gas emissions will cause on-going global warming and changes in all components of the climate system .

“To limit climate change would require continuous reduction of greenhouse gas emissions and mankind should strive to do so to ensure a sustainable natural environment,” he said.

If no effort towards this direction were taken, mankind would see and experience the natural phenomenon such as typhoon, flooding, draught and the like happening more often, such as those that happened in February this year which saw Peninsula Malaysia experiencing long drought and heavy flooding in the interior of Sabah and Sarawak.

Over 100 students and staff of UMS attended the lecture. Also present were Deputy Dean of the School of Science and Technology, UMS, Assoc. Prof. Dr. Zaleha Abdul Aziz. - (FL)