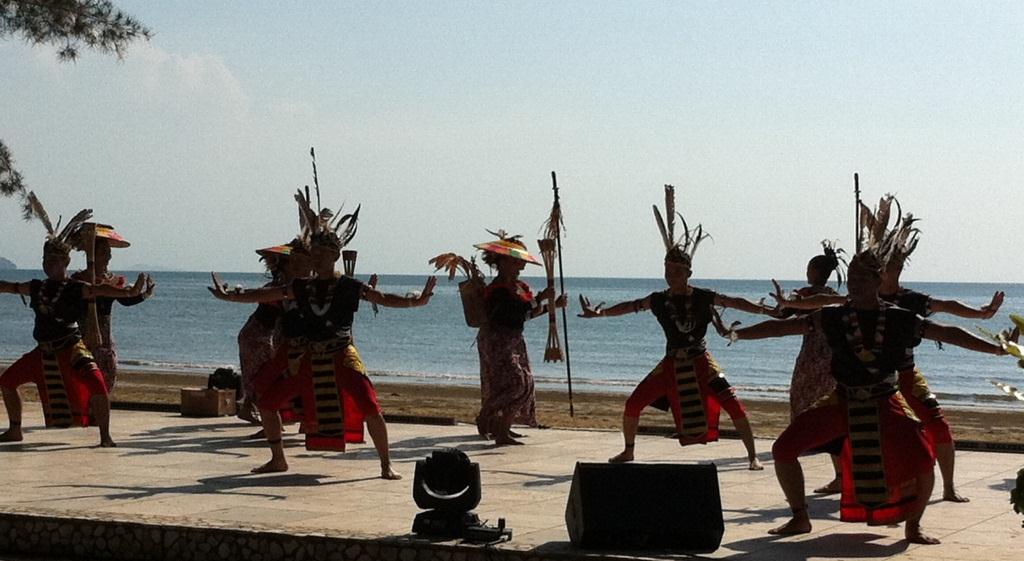 MONDAY, 03 MARCH – The Malaysian Universities Cultural Festival (FEStKUM) made its first appearance last Saturday at the 1st Beach, Tanjung Aru, a popular spot for foreigners and locals alike; showcasing an array of colourful dances and performances.

Foreigners were also seen taking part and enjoying themselves with the cultural performances.

A first timer to Sabah, Norhaslina binti Suhaimi, 19, from Melaka was very excited to have set foot to the Land Below the Wind. This Electrical Engineering student from Universiti Teknologi Melaka (UTeM) said she was speechless when told that she was chosen to represent UTeM, out of hundreds of hopefuls who went to the audition. The second daughter of four siblings said, her parents were also happy and gave their blessings for her to join and represented UTeM in presenting the ‘Dondang Sayang’ and ‘Baba Nyonya’ dances.

Echoing Norhaslina’s delight was Muhammad Aizat bin Azed, 21, from Banting Selangor. The first child of four siblings, this second year Civil Engineering student from Universiti Malaysia Pahang (UMP) was thrilled to have set foot for the first time in Sabah. Aizat, who is also an Exco of Cultural Arts, Student Representatives Council (MPP) for UMP presented the ‘Burung Kerak Nasik’ dance which he said they practiced everyday for a month. He planned to visit Kundasang and climb Mount Kinabalu saying that the sea here was more blue than he imagined.

Earlier in the day, a kite-making mini workshop was held and conducted by Wau-making master from Terengganu, Dzulkifli Abd Rahman who has been in Sabah for the past 20 years and is now earning a living as an artist at a five-star resort in Tuaran.

The festival which is organised by the Malaysian Universities Cultural Council (MAKUM) was officially opened on Friday night by the Minister of Local Government and Housing Sabah who is also the State Assemblyman (ADUN) for Sulaman, Datuk Seri Panglima Haji Hajiji Haji Mohd. Noor. – FL