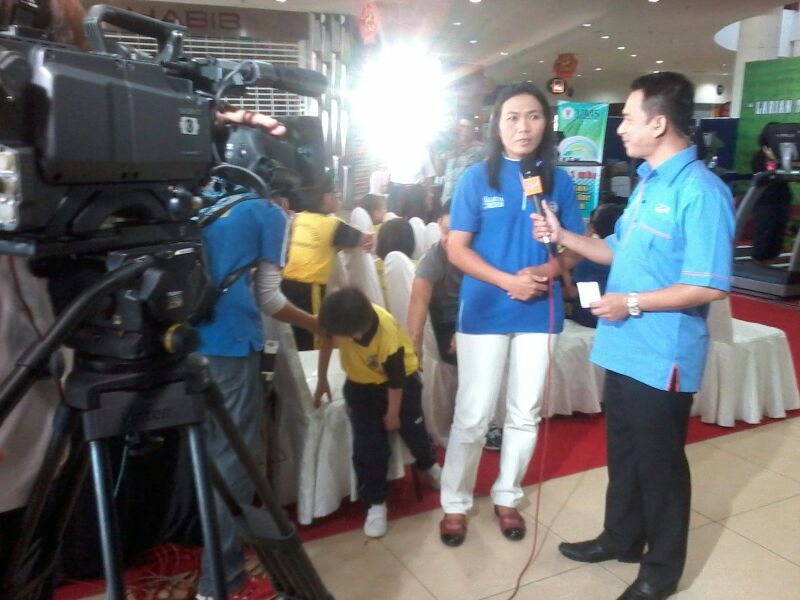 WEDNESDAY, 29 JANUARY – The grand effort by UMS athletes to bring honour to UMS and the state’s name in the ‘Malaysia Longest Distance Running on a Treadmill by a Group’ continued to receive attention from various quarters.

Today, crew from Selamat Pagi 1Malaysia (Good Morning 1Malaysia), Department of Broadcasting Malaysia (RTM) made a live coverage of the event through TV1.

According to the producer of the programme, Adelia Amit; RTM was impressed with the efforts undertaken by UMS especially when the feat was also participated by an athlete with special needs (OKU) and a lone female participant.

“This effort and achievement are noteworthy and should be made public as a motivation and an example especially to the younger generation. It is also something for the people of Sabah to be proud of,” she said when met by Chancellery media.

As of 4.00 pm today which is the ninth day, the athletes have run a total of 1,806.84 kilometre in 216 hours which completely erased the old record of 120 hours set by UiTM Samarahan in the Malaysia Book of Records.

The athletes will continue with their run on the treadmill until they have reached their targeted time of 264 hours on the 31 January 2014. – SS (FL)