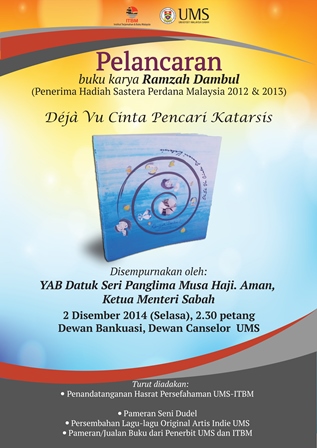 The book, which is a sequel to his first book ‘Alien Menchari Chinta’, another result of his works was elected as the best poetry book in the Malaysia Premier Literary Award 2012.

Dr. Ramzah, a lecturer of Universiti Malaysia Sabah (UMS) in the field of Synoptic Climatology, became active in poetry since 2005 which resulted in his recorded collection of poems in ‘Alien Menchari Chinta’.

Dr. Rem’s second book which contain a collection of poems, notes, doodles and paintings is published by the Institute of Translation and Books Malaysia (ITBM). The book will be launched by the Chief Minister of Sabah, Datuk Seri Panglima Musa Hj. Aman on 2 December at Dewan Bankuasi (Banquet Hall), UMS.

Concurrent with the launching of the book, the 4th series of solo exhibition by Dr. Rem entitled ‘Sahabat Angin dan Laut’ will also be held. The exhibition is a symbolic interpretation of the state’s wealth of natural treasures and cultural beauty that blended in it.

A letter of intent will also be signed between UMS and ITBM, which is expected to be witnessed by Datuk Seri Panglima Musa Haji Aman. – MA (fl)