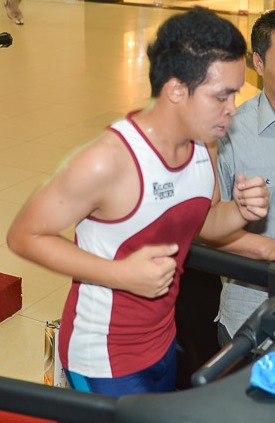 FRIDAY, 24 JANUARY – Nothing is impossible to a willing heart. That phrase probably fits the team of UMS athletes in their bid to break the record of ‘Malaysia Longest Distance Running On a Treadmill by a Group’ amidst health threats and injuries.

According to coordinator of the athletes and records, Stephanie Chok; the run entered its fifth day today and nine of the athletes continue to be in high spirits even though two of the athletes developed fever and another one had a knee injury on the second day of the feat.

Speaking when contacted by Chancellery media, she said even though the affected athletes had to endure their situation but they continued and reached to a time of 89 hours 44 minutes as at 10.25 am this morning.

“During the 46th change, the athletes had reached a total of 738.4 kilometres. I believe they would be able to run for 264 hours as what we have targeted,” said the lecturer from the School of Education and Social Development (SPPS).

Touching on the athletes who developed fever during the feat, she explained that they were not used to running in an air-conditioned environment as they were accustomed to exercising under hot weather before.

However she said both athletes have improved on the forth day of the run and continued along with their peers.

“The athlete who suffered knee injuries was Zulkilinsius Lairi and was asked to rest. However his condition seemed to be better and would be expected to continue running again tomorrow or the day after,” she added.

The ‘Malaysia Longest Distance Running on a Treadmill by a Group’ Programme is another effort by a group of athletes consisting of UMS students to carve a name for the university in the Malaysia Book of Records.

This programme which is running on a treadmill is located directly in front of the main entrance of the 1Borneo hyper mall and had started last Monday and expected to end on 31 January 2014. – SS (FL)