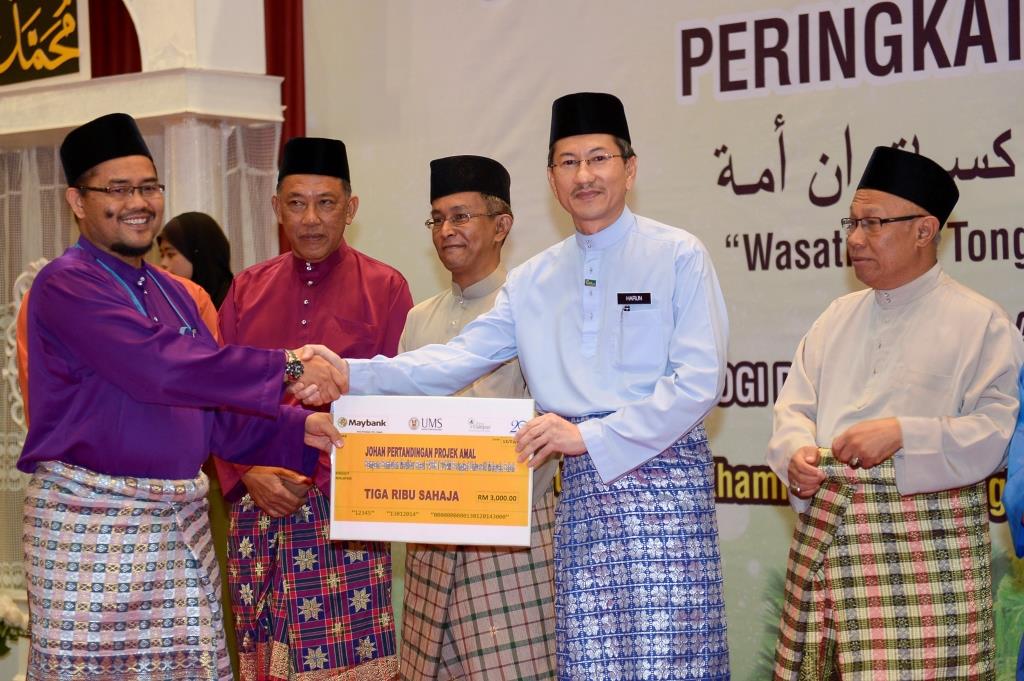 THURSDAY, 13 FEBRUARY – The Universiti Malaysia Sabah (UMS) level Maulidur Rasul celebration this year was celebrated in a dissimilar way compared to previous years when parade and banner contests were held.
Instead, this year it focused on doing community activities in a group in the rural areas which saw some departments combined and divided into seven groups.
Among the charity projects undertaken were at Kampung (Kg.) Binsulok, Membakut by Group 1; at SK Poring-poring, Inanam by Group 2; Kg. Tumau, Kota Belud by Group 3, fish trap repair project at Semporna by Group 4; charity project at Masjid Al-Mujahiddin, Kg. Gudon Menggatal by Group 5, community work at Masjid Kg. Marabau, Kota Belud by Group 6, and a charity programme of helping the fire victims of Kg. Tambilaung, Kota Belud.
UMS Vice-Chancellor, Prof. Datuk Dr. Mohd. Harun Abdullah in his speech during the opening ceremony said that charity projects such as these would help enrich cooperation among UMS community.
He said this is in line with the theme of the Maulidur Rasul celebration ‘Wasatiyyah Tonggak Kesatuan Ummah’, in uniting the minds and harmonise our actions in striving towards excellence.
“If we want to be a community that excels, unity in Islamic morality and good values should be fostered and cultivated.
“On the other hand, if we are divided, slanders and in conflict with each other, we are the cause of the failure in planning for ourselves, eventually ruining society,” he said.
Group 6 which was led by the Dean of the School of Science and Technology, Assoc. Prof. Dr. Baba Musta emerged as the winners in the charity project competition bringing home cash prize of RM3,000. Second place was won by Group 5 led by the Dean of School of Medicine, Prof. Dr. D Kamarudin D Mudin bringing home cash prize of RM2,000, whilst Group 3 led by Deputy Vice-Chancellor of Student Affairs and Alumni, Assoc. Prof. Datuk Dr. Hj Kasim Md. Mansur took the third spot earning them RM1,600 in cash.
A well-known preacher, Ustaz Haslin Bahrin was also invited to give a talk besides a Qasidah presentation by the Sekolah Rendah Islam Al-Hafiz Qasidah Group. – MA [FL]
Media and Citra Division
Chancellery Department