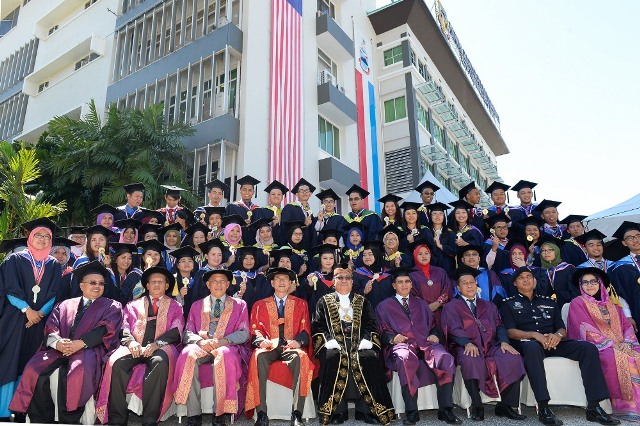 TUESDAY, 18 NOVEMBER – Knowledge acquired while studying at the university should be properly utilised in order to generate integrity and efficacy of all aspects of the development of the country, whether from the economic, political or social aspects.

This was stated by the Vice-Chancellor of Universiti Malaysia Sabah (UMS), Prof. Datuk Dr. Mohd. Harun Abdullah in his speech during UMS Town & Gown Parade in the capital city of Kota Kinabalu, yesterday.

He said that at this competitive age, graduates should not be complacent but should always be alert and responsive to changes so as not to be left behind.

“Knowledge and experience should serve as the basis and guidelines in realising the vision of the country in line with our responsibilities in supporting the university’s motto ‘Strive to Excel’, he said.

At the ceremony, 67 graduands were given a key as a symbol of acceptance to Kota Kinabalu city by the Mayor of Kota Kinabalu City Hall (DBKK), Datuk Abidin Madingkir.

Datuk Abidin said it was a recognition for the graduates as an educated and professional generation who will be the leaders of tomorrow.

“The Town & Gown Parade is a pride of the city because it is a sign of the existence of a higher learning institution that has produced thousands of graduates in the city of Kota Kinabalu in particular, and in Sabah in general,” he added.

The Town & Gown Parade in the city of Kota Kinabalu marched as far as 0.8 kilometres from Kota Kinabalu Community Hall to DBKK building in conjunction with UMS 16th Convocation Ceremony this year. – ZMD (fl)