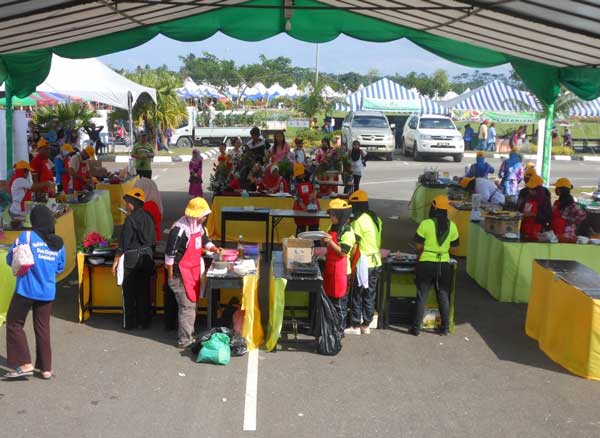 MONDAY, 11 NOVEMBER – The air of festivities at the Agri Carnival which was held at the School of Sustainable Agriculture (SPL) premises Universiti Malaysia Sabah (UMS) Sandakan Branch Campus recently was further sparked by such events such as the Sandakan Top Chef and Flower Arrangement Competition.

With the theme Malaysian Cuisine, the competition had attracted participation from the surrounding community around the district which included restaurant owners, colleges and higher education institutions.

For the Sandakan Top Chef event, the competition was won by Team Kura-kura Dalam Perahu (Tortoise In the Boat) consisting of Food and Catering students from the Community Development Department (KEMAS) Sandakan. Their cuisine won the hearts of the judges leading them to win the title and bringing home prizes in the form of cash, certificate, hamper and rice.

The Flower Arrangement Competition which had showcased some creativity saw Shamsar Samsudin beating other participants to win this competition and bringing home cash prize, certificate and hamper.

In the meantime, the manager of both competitions, Azahari Wilson when contacted by UMS Chancellery Media said that the organising of these competitions was aimed at forging closer rapport between UMS and the Sandakan community.

“It is also a way to get them involved by introducing UMS Sandakan Branch Campus community to this Natural Environment society,” he added.

The SPL Agri Carnival 2013 which went on for three days was the focus of the community there more so with the presence of Stacy AF, Felix Agus, Lotter AG and Alex Raja Lawak. The official opening ceremony was done by the Chief Minister of Sabah, Datuk Seri Panglima Musa Hj. Aman. – SS