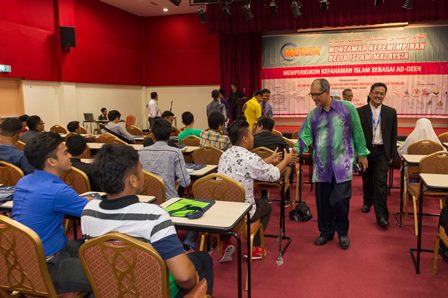 In his keynote address entitled 'Building Sabah Muslim Youths’ Personality', he explained that the youth development activity was a collective responsibility of all Muslims from various government and private sectors including the community.

“Youth development in various dimension should be encouraged through exposure in proper channels such as knowledge-sharing and continued training programmes such as this,” he said.

Meanwhile, a participant from Pusat Giat Mara, Putatan Mohd. Afindi Johari when met by Chancellery Media said that he was overjoyed in joining the congress which successfully gather youths from around Kota Kinabalu.

“I gained lots of knowledge especially those related to self-empowerment towards knowledgeable youths and be more competitive,” he said.

With the theme, ‘Memperkukuh Kefahaman Islam Sebagai Ad-Deen’, the congress was organised for the second time in Sabah and was attended by the Mufti of Sabah, Sahibus Samahah Datuk Hj. Bungsu Jaafar who also presented a special keynote address, a presentation of congress paper by the Chief Executive Officer of WAMY, Ustaz Shahrin Awaludin  as well as the Head of the Mosque and Islamic Affairs Unit (UHEIM) UMS, Dr. Muhammad Suhaimi Taat were also done.