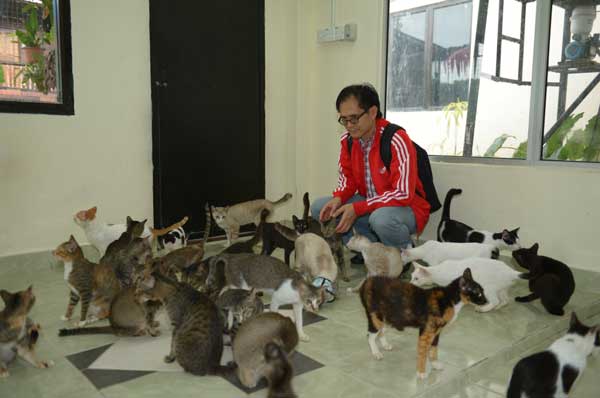 SATURDAY, 12 OCTOBER – His love for 50 four-legged fur ball friends was what brought us to his house called Rumah Pangi situated in Tuaran, on 11 October, 2013 at 9.15 am. Dr. Rem is a scientist and a specialist in Climate Change and Climatology in Sabah and internationally. One would ask, where does he find time to take care of his furry friends given his hectic schedule as a lecturer and researcher?

Dr. Ramzah Dambul or ‘Dr. Rem’ as he is more affectionately known hails from Ranau, Sabah and is attached to Universiti Malaysia Sabah (UMS). He received his Doctor of Philosophy (PhD) in Synoptic Climatology from East Anglia University, Norwich in 2007. He is now attached to the King Abdul Aziz University, Jeddah researching the long term climate change and its effect on the world socio economy.

As an expert in the study of climate change, Dr. Ramzah who is more affectionately called ‘Dr. Rem’, is a unique man. In an interview with him recently, Dr. Ramzah unwrapped his life story regarding the forecasting of the weather, his life with his cats and the story behind his poems.

UMS Media: Is is true that you are attracted to the way the traditional way of forecasting the weather and how is it done?

Dr. Ramzah: Yes. One of the ways I still remember to this day was when my mother would quickly picked her laundry which were still hanging on the lines because she knew that rain would be falling soon. My mother could tell just by looking at ants that would leave their habitat bringing their eggs to higher grounds. This traditional knowledge is indeed very interesting.

UMS Media: How many cats do you have and how did the interest come about in wanting to take care of them?

Dr. Ramzah: Actually, it was the feeling of empathy towards them that had led me to take care of them. In 2009, I was taking care of two cats and another three that I got from Tuaran town. All the cats were very thin and didn’t have enough to eat. So, I brought them home, bathed and nursed them. I am actually allergic to cats fur. The affection towards them came because I can’t help seeing them being left without being cared for. For me, cats are like human, they need attention, to be protected and loved. Because of that, I built a house especially for them which has now grown to 50 in total. This doesn’t include the one that was found just a few days ago which is now quarantined because of sickness.

UMS Media: How do you find time to care for them and how much do you spend just to take care of them?

Dr. Ramzah: I have a helper who will help to take care of them when I’m not around. All my cats have a medical record and are potty trained. Alhamdulillah, all my cats are well-disciplined. About the costs, I figured it to be around RM900 to RM1,200. If you look closely, these cats are not so attractive, they are not chubby and fluffy. I put emphasis on their health rather then their attractiveness. For me, the reason why cats die early is because of being over-weight which leads to them being inactive and sickly.

UMS Media: Besides being busy and your focus on your career as well as taking care of your cats, you are also a unique poet, filled with passion, revolving around the longing for love. As an example, your anthology of poems in ‘Alien Menchari Chinta’. Is it about yourself?

Dr. Ramzah: Oh no! In fact, 99 per cent of the poems are talking about the life of a friend and the environment. Only one or two would probably be about me.

UMS Media: How about the poem on Hujan Khinzir (Swine Rain)? What is the story behind it?

Dr. Ramzah: This poem talks about my disappointment on some of our undergraduates who are not keen to quest for knowledge, they are here only because of the ‘paper’. The knowledge that they seek is only on paper.

UMS Media: Are you not concerned when some people questioned why a scientist would be delve into arts and creative arts?

Dr. Ramzah: I have never take offence or get angry with those remarks because they are entitled to their own opinion. This is like a therapy for the soul and mind. It is not peculiar when a scientist can draw doodle and writes poems. In fact, it helps me to master my Malay language better.

UMS Media: Do you write because of you want to achieve something? Maybe a Literary Award?

Dr. Ramzah: In fact for me, arts and literature are not meant to be valued or be given award for, it is a priviledge for me to express my ideas and feelings. I will continue to write ceaselessly. – FL