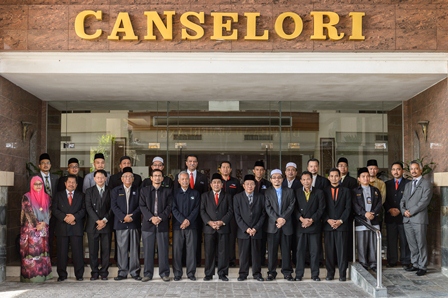 TUESDAY, 28 APRIL – The Islamic Centre of Universiti Malaysia Sabah (UMS) is ready to work with various parties including the Islamic Development Department of Malaysia (JAKIM) to disseminate information particularly issues related to the teachings of Islam.

This include the organising of special talks, preparation of Friday sermon texts at UMS mosque and programmes on awareness towards the love of religion and nation as well as living harmoniously among the multiracial society of Malaysia.

This was stated in a statement by the representative of UMS Islamic Centre at a meeting between JAKIM Directors and Directors of Islamic Centres of Public Universities and Institutions of Higher Learning, at the Executive Board Room, UMS recently.

The meeting among others touched on the cooperation between JAKIM and the Islamic Centres of universities in Malaysia in providing clear explanations on Jihad and the Malaysian Syariah Index.

The meeting chaired by the Deputy Director (Human Development) JAKIM, Dato’ Haji Razali Shahabudin, also recommended that the Islamic Centre of each university coordinate with the relevant agencies such as the Royal Malaysian Police (PDRM), National Security Council (MKN) and others pertaining to the organising of information programmes on issues such as the misconceptions on Jihad which was increasingly worrying of late. – (fl)