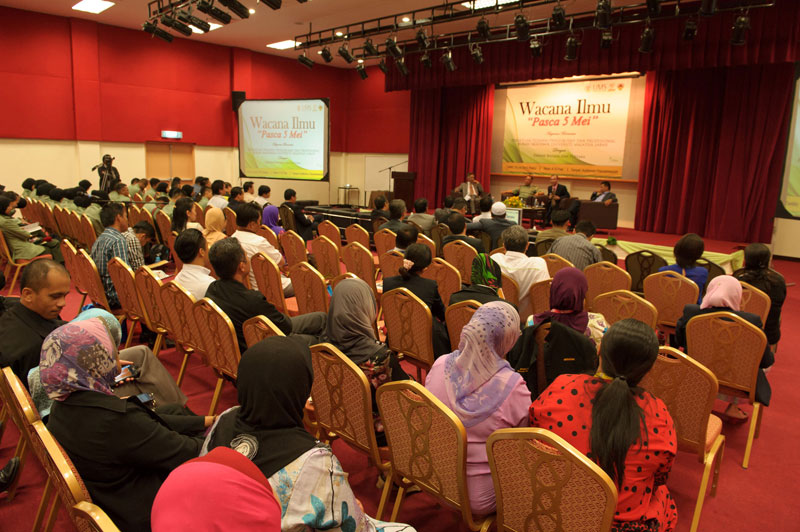 WEDNESDAY, 19 JUNE – Following the recent 13th General Election (GE) results which saw the Barisan Nasional (BN) forming the federal government, a knowledge discussion entitled ‘Post 5 May’ was organised which touch on BN’s victory from the academic view and its effect on the socio-economy of Sabah.

Taking into account the fact that Sabah and Sarawak are seen as the biggest contributors to BN’s victory, Datuk Ag. Buhtamam suggested that it was timely for the government to take major transformation towards a total change in the rural areas so that its community would enjoy a better living environment.

“The perception of setting aside rural development could be considered as immature politics because the mandate given by the community there to BN was clear.  This is the right time for the government to make changes by halting suggestions of developing the urban areas that are already seen to be well developed,” he said.

Meanwhile, Dr. Jeniri Amir commented on a question by members of the floor that the new generation of today preferred the opposition party because they saw the inequality practiced in today’s politics and wanted change.

“What the Y generation want is good education, career opportunities, affordable housing and good governance in the government.  This generation is a generation that will be the government one day.  This is the time for the government to take into account the ideas of the young generation and to improve the present system,” he said.

Asked for his opinion on the subject of top posts offer for Sabahans and Sarawakians, Datuk Abdullah Mohd. Said opined that such offers were good.

“Executing our responsibilities in a mature fashion is very important as a leader and it should run parallel with solid work quality so that it would not go to a waste,” he said.

Earlier, UMS Vice-Chancellor Prof. Datuk Dr. Mohd. Harun Abdullah in his opening speech said that the government chosen during the recent GE, either at the national or state level were the government that received the public’s mandate.

“The practice of democracy as the main thrust is a good mechanism ever created by human being.  The differences in opinion, ideas and outlook are not the cause of catastrophe or the source of division amongst us but if properly addressed and managed appropriately, it would bring blessings and will develop the country,” he urged.

The knowledge discussion which ran for two hours managed to bring together intellectuals and received good response from UMS staff, government agencies, NGOs, and students of Higher Learning Institutions around Kota Kinabalu. - FL