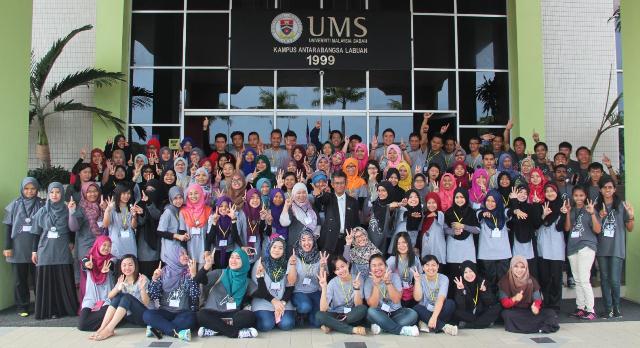 WEDNESDAY, 08 APRIL – A total of 104 students of the Industrial and Organisation Psychology Club, Universiti Malaysia Sabah (UMS) were thrilled to have visited the Federal Territory of Labuan, recently.

They were students from first and second year of the Industrial and Organisation Psychology Programme, Faculty of Psychology and Education (FPP) who were involved in various activities organised in conjunction with the Self-Awareness Programme 2015.

He said the programme also aimed to provide encouragement and motivation to students in the aspects of academic and personal-development.

In addition, it also foster and encourage bonding among students through peer-guiding between year two and year one students and guidance from lecturers (mentor-mentee).

“We are very excited to have have the programme at the Federal Territory of Labuan because a large of the students who orginates from Sabah, Sarawak and the Peninsular set foot for the first time at this duty-free island that is fast developing,” she said.

She was met after having a briefing and meeting with the Director of UMS Labuan International Campus, Associate Professor Dr. Murnizam Haji Halik.

The students also explored the Japanese War Monument at Taman Damai, Layang-Layangan and Taman Burung including the Chimney Museum at Kampung Lubok Temiang.

A brainstorming session on academic, learning and teaching as well as a cultural night were also held.

Meanwhile, Dr. Murnizam hoped the three-day programme would provide extra advantages to the students involved in facing various challenges in the world of higher education.

He said as a student of higher learning institution, they should show exemplary manners not only to their peers but also the local community especially students of primary and secondary schools who had the intention to further their tertiary education in universities such as UMS.

“We want highly educated students to give back to UMS and the community in their own areas,” she concluded. – ZMD (fl)