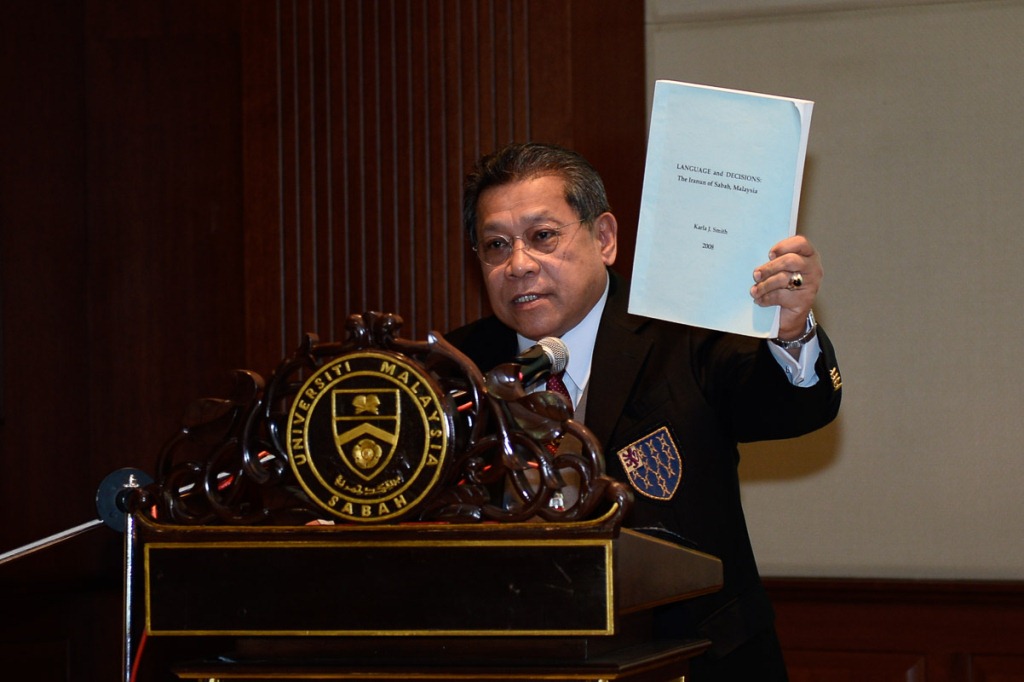 TUESDAY, 7 APRIL – Ethnic languages from the various ethnic groups, especially the minorities in Sabah should be preserved and protected from facing extinction.

This was emphasised by the Speaker, Tan Sri Datuk Seri Panglima Pandikar Amin Hj Mulia who demanded that the leaders of today look at the matter seriously.

“Citing the slogan ‘Bahasa Jiwa Bangsa’, it is a really sad scenario watching young kids donning their traditional costumes, but unable to communicate in their native language, where the exterior is only meant for show but with an empty interior,” he emphasised.

He was speaking at the opening of the Preschool Heritage Language Education Forum at Dewan Bankuasi (Banquet Hall) Universiti Malaysia Sabah (UMS) this morning.

Pandikar added, four sources that led to the extinction of heritage language were our own wrong-doing, an education system that adopts Bahasa Melayu, everyday social interaction and the mass media.

“The perception of our parents once considered being proficient in the national language, namely Bahasa Melayu was the pathway to success, thus marginalising our mother tongue and putting it on the verge of extinction.

“Although the national language is the medium to unite the various races in the country, but why was it done at the expense of the heritage of ethnic minorities?

He praised the efforts by UMS in organising such forum that could open the eyes of various parties on the importance of the protection of our heritage language from pre-school level.

“According to a study by researchers, a race when educated from early pre-school in its own native language will tend to excel in secondary level and onwards to university.

“Thus, with the organising of this forum, it is hoped that it could give new momentum to the cause of defending the ethnic heritage language,” he added.

The two-day forum was organised by the Centre for the Promotion of Knowledge and Language and the Kadazandusun Chair supported by SIL International Malaysia, Partners of Community Organisations (PACOS Trust) and the United States Embassy. – MA (fl)